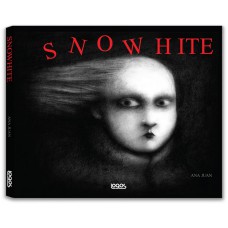 “Beyond the wall is a wood where wild beasts dwell.”

Totally in black and white, Ana Juan draws from the famous brothers’ Grimm tale and offers us a twist, a different interpretation.

The King and the Queen, the sly stepmother and her emissary, the seven redeeming brother, the Prince… all the classical characters are present, but they create a hostile, dark world around the unlucky protagonist, who seems to be driven by the events, victim of the fate. And with the tragic epilogue Ana Juan brings us back to the beginning of the story, in a circular plot, as if asserting the ineradicable cyclic nature of evil and suffering, while giving and ironic, sordid and ruthless interpretation of the classic sweet tale, where the statement “and they lived happily ever after” is not for everybody, not even in the tales!

The illustrator and author:
Ana Juan is a Spanish illustrator, author and painter. Born in Valencia in 1961, she moved to Madrid in the early 1980s. She exhibits her works and publishes her books all over the world – Spain, United States, Japan. Well acknowledged for her original, melancholic, romantic and sometimes merciless interpretation of reality and its stories, Ana has illustrated several covers for the New Yorker, editorials for El País and the covers of many novels by Isabel Allende and others classics of the world literature.
Ana Juan was awarded – among other prizes – the Ezra Jack Keats Prize for best new illustrator (The Night Eater, 2005), the Premio Junceda de Ilustración (For you are a Kenyan Child, 2007) and, in 2010, the prestigious Premio Nacional de Ilustración by the Spanish Ministry of Culture.