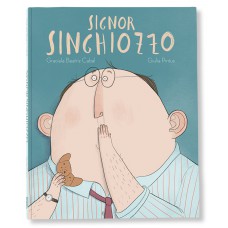 Imagine going out for a snack at the bar one day: as soon as you finish enjoying it, you start hiccupping until the evening, until the next day, and the day after, without ever being able to stop. This is what happens to Mr Benvenuto Benefico, a mild middle-aged employee, bald and wearing glasses, whose life is turned upside down the day he decides to give himself a little treat. At 5.30pm on the 11th of November 1988, Benvenuto leaves the office to get a coffee and, since he is in a good mood, even a nice buttered croissant. And that's when, after collecting the crumbs, the hiccup surprises him... initially it is soft, almost imperceptible, but then HIIICCUP, it gets stronger, HIIIIIICUP increasingly impertinent, HIIIIIIIIICUP increasingly noisy!

From that moment, the life of Benvenuto turns into a whirlwind of medical examinations, under the disapproving eyes of the people. He feels ashamed for what appears to be an incurable and very rare but above all very cumbersome disease. Resigned to live with his new condition, Benvenuto still does not know that the interminable hiccups will be the springboard to new exciting discoveries!
Originally published in 1993 and unpublished in Italy until today, Signor Singhiozzo adds a new volume to the series La biblioteca della Ciopi, illustrated by the delightful and ironic images of Giulia Pintus. A great narrator of the extraordinary in everyday life, Graciela Cabal shows us once again how even the most critical situations may contain the germ of new adventures, because life is always full of surprises and sometimes you just need to change perspective and let yourself go!

The author:
Graciela Beatriz Cabal (1939–2004) was an Argentinian writer and journalist. She was an avid reader and studied with Jorge Luís Borges. She found Cinderellas and perfect houses boring, while she really enjoyed collecting prizes and travelling around Argentina with her suitcase filled with stories. She had children, grandchildren, a husband, a dog, a cat, parrots and a very, very strange home… She wrote more than sixty children books, plus some other books for grown-ups, all of them unpublished in Italy – until now.
Books published by #logosedizioni: Batata (2018), Giacinto (2018), Solletichino (2019) and Signor Singhiozzo (2019).

The illustrator:
Giulia Pintus is a freelance illustrator and sometimes also a bizarre writer. She lives in Piacenza, but she hopes one day she could live all around the world. She likes using the pencil like children, and loves matching sage green with pink. She works in a studio in dots and stripes called Foglie al Vento (Leaves in the Wind). Her puppy’s name is Senape.
With #logosedizioni she has published: Attilio (2017), Giacinto (2018), Batata (2018), Buonanotte Cipollina (2019), La signorina Peppina (2019), Solletichino (2019) and Signor Singhiozzo (2019).