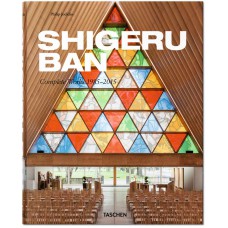 From a house without walls to exhibition spaces in shipping containers, Shigeru Ban has constantly challenged architectural rule and expectation. In the age of the “starchitect,” he has also demonstrated an unremitting altruism in his practice: Over the course of his esteemed career, his inventive, elegant designs have been applied as much to private commissions as to humanitarian relief work at the sites of natural and man-made disasters around the world, from Kobe to New Orleans.
For the Pritzer Prize jury, which chose Ban as its 2014 winner, the architect manifests “total curiosity and commitment; endless innovation; an infallible eye; an acute sensibility.” This updated monograph, compiled with the architect’s collaboration, brings together every one of Ban's built works, including such recent projects as the Tamedia headquarters in Zurich, the Aspen Art Museum, and the Cardboard Cathedral in Christchurch.

After our XL edition, this book is now available in a trade edition

The artist:
Shigeru Ban (born in Tokyo in 1957) attended SCI-Arc in California and earned his degree at the Cooper Union School of Architecture in New York. He is based in Tokyo and Paris.

The author:
Philip Jodidio (born 1954) studied art history and economics at Harvard, and edited Connaissance des Arts for over 20 years. His books include TASCHEN’s Architecture Now! series, and monographs on Tadao Ando, Norman Foster, Richard Meier, Jean Nouvel and Zaha Hadid. He is internationally renowned as one of the most popular writers on the subject of architecture.
#architettura