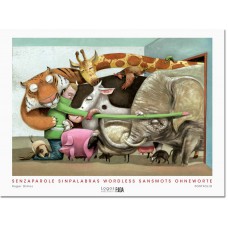 After the great success of Senzaparole (Wordless), which was launched in March 2014 at the Bologna Children’s Book Fair and has already been reprinted after the first edition went out of stock in just two months, Logos edizioni is now publishing a portfolio made of 10 big size illustrations taken from the book to tear off, frame and hang on the wall at home or in the office… 10 eye candies bearing a message that shall not be forgotten.
By building visual associations between moving images of animals – sometimes sweet, sometimes suffering – and the use we daily make of them in the form of food, milk, furs and entertainment industry (zoos, aquariums, circus etc.), Roger Olmos’ illustrations feel like a revelation. Delicate yet powerful, they get stuck in the minds of adults and children alike, questioning their conscience.
By creating a surreal and metamorphic imagery, they make us open our eyes and see the real cost – in terms of suffering and pain – of a daily life we live without caring.
Roger Olmos’ visual language conveys emotions to make us think and face reality but they never want to impose an ideology on us, rather trying to make us see things from a wider perspective.

“When I was a child I was fascinated by the illustrated books my father used to keep in his studio, which I found more interesting than the ones he use to buy for me. Those pictures are engraved in my mind and always will be, in such a strong way that the personal imaginary I have been developing since then has always been shrouded in those unusual atmospheres. This is also what I’m trying to do with my works: to recreate those early stimuli that trained me ‘imagemotionally’ also on the other things.” – Roger Olmos

“All over the world there is a mounting sense of unease about the way in which we human beings have been mistreating and exploiting other living beings. In the most admirable way, Wordless encourages us to look at our fellow creatures with new eyes.” – J.M. Coetzee, Nobel Prize in Literature 2003

#logosedizioni, in collaboration with FAADA (Foundation for the Counselling and Action in Defense of Animals) and Roger Olmos, has given birth to a book that through its images and only few words aims at sensitizing the human beings of all ages to the conditions of the other animals, their fellows creatures: in order to know them instead of exploiting them, to love them instead of abandoning them, to protect them instead of massacring them.

“In an increasingly urbanized world, more and more alienated from nature, it is no surprise that we also distance ourselves from animals. From “other” animals. “Other” because – although we happen to do it quite often – we shouldn’t forget that we are animals too. Maybe intentionally or perhaps because that’s the way it was, animals have been historically presented to us as food, clothes, objects of experimentation and even sources of entertainment. Do we really see all that’s behind the uses of these animals or do we just see what is shown to us? Do we really want to see it? Do we want to be consistent with the consequences of our actions?
WORDLESS invites you to embrace a wider perspective, to look and think beyond the bounds that have been marked for us, outside the world in which we feel comfortable. We invite you to widen the focus, to adopt a more global view of what surrounds and amuses us, of what we use and what we eat. Do we really have the right to do whatever we want to the other animals with which we share the Planet?” – J. Berengueras, FAADA