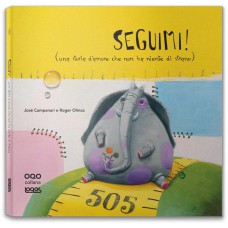 Follow me!
A love story with nothing strange about it

A grey elephant with purple beauty spots, who lives in the forest, falls in love with a black ant with a wasp’s waist. His love is matched, but to be together they have a long road ahead of them. The ant invites the elephant to follow her and the elephant doesn’t give it a second thought. In for a penny, in for a pound, the elephant travels along the road flanked by trees, goes to the bottom of a sewing box, swims inside a bottle of water… After having come so far, the elephant and the ant meet up and enjoy their love together, a love with a wasp’s waist and purple beauty spots… that doesn’t have anything strange about it!
José Campanari presents in his first illustrated album, an amusing, hilarious, surrealist story. With a great sense of humour, he brings us close to a dearly loved character, able to take any road, no matter how difficult it may seem, for love.
In a second reading, Follow me tells us of a love story without preconceptions, able to overcome any type of barrier and differences (size, colour, culture, habits…).
Roger Olmos takes advantage of the surrealist tone of the story to create in a convincing way impossible spaces, full of humour and tenderness. He enriches it with a wealth of detail and great mastery in the strokes in the distinct scenes. The images achieve a special empathy with the reader, who shall find distinct humoristic winks in each reading, stimulating the curiosity and the imagination of the smallest.