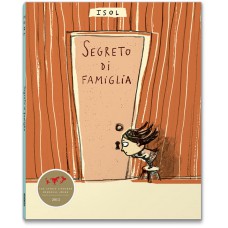 Segreto di famiglia is the story of an ordinary family, one like any other family. Or rather: it’s the story of a girl who thought she had an ordinary family. But one day she gets up earlier than usual and she discovers the horrible secret her mother has accurately kept up to that moment. A secret that makes her family different from all other families. Or maybe not…?
What will her father and her brother say when they discover it as well? How can she keep on behaving as usual now that she knows about it? And how can she face other people, in particular her friend Elisa – a tidy girl who collects coloured pebbles and doesn’t have this kind of problems…?
Humour, anxiety and tenderness blend in the voice of this curious and irreverent girl. She looks at the adult world from an unusual angle, and ends up questioning it and all its rules and odd norms.
This story, however, wouldn’t be so brilliant and funny without Isol’s illustrations – an author who has always conceived text and images jointly, as if they were one single thing. Made of black strokes and big patches of colours (in the shades of pink, yellow and light blue) overlaying the edges to mimic the way children draw, the illustrations are a sort of an ironic counterpart, complementing the girl’s tale, partially astounded and partially terrified.
First issued in Italy by #logosedizioni in 2014, this hilarious book by Isol is now published in the collection la biblioteca della Ciopi to show children that each family is unique in its own way and that appearances often deceive...