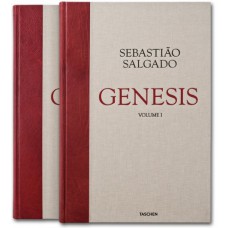 Salgado’s masterpiece: GENESIS — Earth eternal
A photographic homage to our planet in its natural state

Of the myriad works Sebastião Salgado has produced in his acclaimed photography career, three long-term projects stand out: Workers (1993), documenting the vanishing way of life of manual laborers across the world; Migrations (2000), a tribute to mass migration driven by hunger, natural disasters, environmental degradation, or demographic pressure; and this new opus, GENESIS, the result of an epic eight-year expedition to rediscover the mountains, deserts and oceans, the animals and peoples that have so far escaped the imprint of modern society – the land and life of a still pristine planet. The GENESIS project, along with the Salgados’ Instituto Terra, are dedicated to showing the beauty of our planet, reversing the damage done to it, and preserving it for the future.

On over 30 trips – traveled on foot, by light aircraft, seagoing vessels, canoes, and even balloons, through extreme heat and cold and in sometimes dangerous conditions – Salgado created a collection of images showing us nature, animals, and indigenous peoples in such shocking and intense beauty it takes our breath away. In GENESIS, one discovers the animal species and volcanoes of the Galápagos; the penguins, sea lions, cormorants, and whales of the South Atlantic; Brazilian alligators and jaguars; and African lions, leopards, and elephants. Through Salgado’s lens, we travel over icebergs in the Antarctic, the volcanoes of Central Africa, the ravines of the Grand Canyon, and the glaciers of Alaska. We encounter the Stone Age Korowai people of West Papua, nomadic Dinka cattle farmers in Sudan, Nenets and their reindeer herds in the Arctic Circle, as well as the Mentawai jungle communities on islands west of Sumatra.

This Collector’s Edition, designed and edited by Salgado’s wife and partner Lélia Wanick Salgado, features exquisitely reproduced large-format images arranged not by theme or region but rather conceived as a portfolio that takes beholders on a journey around the globe, immersing them in Salgado’s vision of the Earth’s mesmerizing scale, order, and beauty.

GENESIS is printed on a traditional coated 250 gsm art paper from the German paper mill Scheufelen that is no longer available on the market and was produced specially for TASCHEN. The black and white pictures are reproduced in a four-color separation process, with two blacks and two shades of grey; the density of the blacks achieved rivals that of the finest silver gelatin prints.

GENESIS was printed and bound in an Italian workshop utilizing traditional craftsmanship techniques that are unique worldwide in this field, using Italian Cialinen fabric for the cover.
The Ando book stand was hand made in Spain, and the leather originates from Britain.
Ando's simple and innovative design consists of two “twin” pieces of wood, bound together with leather, into which a third piece of wood can be slotted to form a sturdy, elegant display.