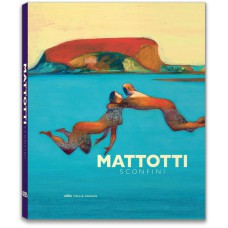 The catalogue of the exhibition Mattotti-Sconfini at Villa Manin in Passariano di Codroipo, Udine
from October 29, 2016 to March 19, 2017

Painter, illustrator, traveller – it is impossible to exactly define Lorenzo Mattotti. Fallen in love with drawing at a very young age, he began his career in the ’70s ranging from comics to the illustration of classic books (from Collodi’s Pinocchio to Stevenson’s The Pavilion on the Links), from posters and illustrations for international newspapers and magazines (Le Monde, The New Yorker, Süddeutsche Zeitung, la Repubblica…) to collaborations with many world-famous artists (Lou Reed, Wong Kar-wai, Steven Soderbergh, Michelangelo Antonioni…). His books have been translated all over the world and dozens of exhibitions have been dedicated to his artwork throughout Europe and the United States.

His production challenges the very idea of boundary: since his beginnings, Mattotti has tried to push graphic languages and techniques to their limits. His constant desire to evolve and experiment has led him to try his hand at different techniques – pastel, coloured pencil, acrylic, Indian ink, oil paint, charcoal, etc. – and to deal with a great number of themes, exploring and sometimes blending together different genres. Sconfini (“Trespasses”) seems therefore a fitting title for the big anthological exhibition that will be held at the magnificent Villa Manin in Udine, from October 29, 2016 to March 19, 2017.

The exhibition, designed and organized by the Fonds Héléne & Édouard Leclerc pour la Culture, was held for the first time in Landerneau, France, from December 6, 2015 to March 6, 2016, with the title Infini. It offers a selection of almost 300 artworks that allows visitors to travel through the different chapters of a big introspective journey marked by the triumph of imagination, the art of composition and the expressive power of colour. “My production is – even to me – a journey in search for an identity. I am probably afraid of getting lost myself” says Mattotti in the conversation at the beginning of the catalogue.
The catalogue, which is the result of a strict collaboration between Mattotti himself and curator David Rosenberg (with the help of Lucas Hureau, associated curator), is finally available in an Italian edition published by Logos Edizioni. Metamorphosis, Angels, Ruins, Attraction, Love are just some of the themes that make up the exhibition itinerary and the different chapters of the book, which page after page will allow readers/viewers to live or relive the experience of the exhibition, thanks to a 360 degrees view on Lorenzo Mattotti’s vision and trespassing work.