SAY A LITTLE PRAYER (I) 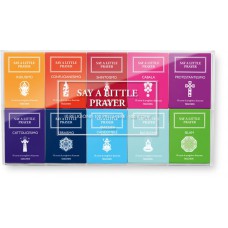 Say a Little Prayer (SALP) provides a fresh, modern means of relating to the spiritual. In our ever more frenetic age, this original and exciting project does not intend to replace or compete with pre-existing religious practices and imagery, but instead toreinterpret the moments of calm offered by religious iconography and text in a contemporary, multicultural way.
Uniting spiritual schools of thought from across history and geography, the project presents ten colorful card sets connected with Brazilian Candomblé, Buddhism,Catholicism, Confucianism, Hinduism, Judaism, Kabbalah, Islam, Protestantism, andShinto. Each set contains eleven beautifully designed cards, including one card introducing the religion, and 10 individual icon and prayer cards, which combine an image with a corresponding text.
Whether illustrating the exquisite, intricate design of Islamic patterns; the beauty of Hindu goddess Durga; or the detailed figurative symbolism of Kabbalistic imagery, each card is a delicate artwork, as well as an inspiring insight into spiritual thought around the world.
SALP is the work of acclaimed creative director Giovanni Bianco and his New York–based Studio65.

BRAZILIAN CANDOMBLÉ
Candomblé originated in Nigeria, and was brought to Brazil by Africans who had been illegally captured and then sold as slaves. This religion is based on beliefs, practices, and rituals, and above all, on the energy that comes from nature as well as all of nature’s elements. Candomblé has existed for over 200 years, and today is practiced by believers across the globe.
BUDDHISM
The religion and philosophy that is derived from the teachings of the Buddha, or “enlightened one,” who lived in the northern region of India between the 6th and 4th centuries BCE. Approximately 350 million people worldwide adhere to Buddhist teachings, primarily in Asia. Meditation and the observance of moral precepts are central to the practice of Buddhism.
CATHOLICISM
There are approximately 1.1 billion Catholics in the world, more than any other Christian group. It is the dominant Christian tradition in many European countries, a major religious tradition in much of Africa, and the religion of most of the population in Central and South America. Catholics believe in the ancient Christian doctrines of The Trinity (God is Father, Son, and Holy Spirit), the Incarnation of God in Jesus Christ, and the saving work of Jesus in his death and resurrection.
CONFUCIANISM
The scholarly tradition and way of life that adhere to the teachings of Confucius (K’ung Fu-tzu), who lived in the 6th to 5th centuries BCE. Confucianism, although more a philosophy than a religion, is practiced by more than 300 million people worldwide, primarily in China and Korea. Confucius taught the value of living in peace and harmony as well as consideration and respect for ancestors.
HINDUISM
The world’s third-largest religion with an estimated 850 million practitioners, Hinduism is practiced primarily in India but has followers all over the world. It is considered to be the oldest of the world’s major religions. In Hinduism, the whole of creation is seen as the dynamic game of the Trinity of Gods: Brahma, Vishnu, and Shiva. Brahma is the creator of the universe and of all beings.
ISLAM
One of the world’s major religions with over 1 billion practitioners, Islam (literally “surrender” to Allah) was founded in the 7th century CE by the prophet Muhammad. Although believers in Islam live throughout the globe, it is widely practiced in the Middle East and Africa. Islam is a monotheistic religion, believing Allah to be the one God, with Muhammad as His greatest messenger.
JUDAISM
One of the world’s major monotheistic religions, Judaism started as the faith of the ancient Hebrews, and is now practiced throughout the world. Its sacred text is the Torah, consisting of the teachings revealed to Moses by God on Mount Sinai. Additionally, the Talmud, teachings and thoughts of hundreds of rabbis gathered over 15 centuries, remains an essential sacred text in the Jewish faith.
KABBALAH
Although primarily associated with Jewish mysticism, Kabbalah is not specifically a Judaic practice; people of many faiths practice Kabbalah. The teachings of Kabbalah include the belief that each person is a work in progress and has the potential for greatness; the goal of Kabbalistic practice is to free oneself from the human ego and create an affinity with the essence of God.
PROTESTANTISM
Protestant Christianity traces its roots to the Reformation of the Catholic Church begun by Martin Luther in the 16th century. Protestants emphasize the Bible as the only rule of life and faith, and believe that salvation comes by “believing in your heart and confessing with your lips” that Jesus Christ is Lord. They teach that each believer approaches God on his own, without need of priests, saints, or other intermediaries, and that every believer is given grace to interpret the Scriptures. There are about 500 million Protestant Christians in the world.
SHINTO
Shinto (literally “the way of the gods”) is the native religion of Japan. Its origins date to over 1,500 years ago, and Shinto is currently practiced by approximately 100 million people. Shinto worship is rarely congregational, more often done in private.

The author:
Since 1994, Creative Director Giovanni Bianco has dedicated his unique artistic vision to the worlds of fashion, luxury and entertainment. In 2001, he formed Studio 65, where together with a team of artistic minds and innovative spirits, he serves a high profile, multinational clientele. High end labels like Versace, Miu Miu and Zegna number only a few of those that rely on the Studio’s expertise to communicate their brands. In addition, Giovanni Bianco and his Studio have successfully used their savoir-faire to collaborate with Madonna on numerous projects since 2004.