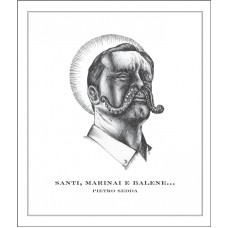 There are certain fields of visual expression that due to their nature and their target public – and despite undeniably constituting part of the sphere of artistic image creation – are hardly ever classified as Art with a capital A. Capital A art is what fills the pages of elitist glossy magazines and relegates what it considers its poor relations in other kinds of niche publications that are much more popular and down-to-earth in their packaging, labeled and marginalized as underground forms of communication. The highly variegated world of tattooing is one of these, partly due to its perpetual oscillation between extremes of utterly mediocre amateurism and highly complex and refined originality. But even the latter kinds of tattoo creation are snobbishly denied the aesthetic status that those who look at them without prejudice know they deserve.

The culturally complex tattoos created by Pietro Sedda inhabit this limbo, suspended between mere subjective experience connected with the tastes of those who carry them on their skin (making it impossible to classify them as “works of art”) and an outstanding intrinsic quality which, on the contrary, would make them cult works in trendy art galleries if they could be contemplated on more conventional supports. This ambiguity, it must be said, is inherent in Pietro Sedda’s creative personality, for whom it is partly an imposition and partly a deliberate stance. His artistic identity hovers perpetually between two poles: the professional tattooist (one of the most internationally renowned and appreciated in the field) and the conceptually complex and sophisticated visual artist who has no desire to be put into harness by the Contemporary Art establishment.

Santi, marinai e balene... e disastri, is born as an ambiguous work midway between an artist’s monography and a tattoo book. It aims at giving a papery and portable support to the work by Pietro Sedda, but it is also an attempt to broaden the public interest in this very ancient art that, during the last years, has become a trendy phenomenon and an almost obligatory body decoration, especially by relating it to the artistic world to which it irrefutably belongs.

The artist:
Pietro Sedda, #tattooArtist from Sardinia and Milanese of adoption, is certainly one of the Italian cult tattoo artists of the moment, precisely for his well-defined and international artistic imprint. It takes months to fix an appointment at his studio.
In 2014 he has “tattooed” nine Grand Prix chairs by Fritz Hansen that have been auctioned and whose takings were donated to the Dynamo Camp, the first camp of recreational therapy in Italy that hosts boys and girls from 6 to 17 years suffering from serious diseases.
Books published by #logosedizioni Santi, Marinai e Balene..., Black novels for lovers, Neroblue limited edition, numbered and signed by the artist.