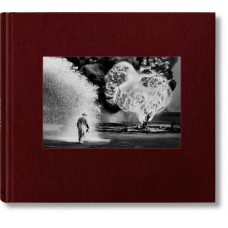 In January and February 1991, as the United States–led coalition drove Iraqi forces out of Kuwait, Saddam Hussein’s troops retaliated with an inferno. At some 700 oil wells and an unspecified number of oil-filled low-lying areas, they ignited vast, raging fires, sending billowing black clouds over the region and thousands of tons of nitrous oxide and carbon dioxide into the atmosphere.

As the desperate efforts to contain and extinguish the conflagration progressed, Sebastião Salgado traveled to Kuwait to witness the crisis firsthand. The conditions were excruciating. The heat was so vicious that Salgado’s smallest lens warped. A journalist and another photographer were killed when a slick ignited as they crossed it. Sticking close to the firefighters, Salgado braved the intense danger, stench, pollution, and scorching temperatures to capture the ravaged landscape; the air choking on charred sand and soot; the blistered remains of camels; the sand littered with cluster bombs; the flames and smoke soaring to the skies, blocking out the sunlight, dwarfing the oil-soaked firefighters.

The epic monochrome pictures first appeared in The New York Times Magazine in June 1991 and were subsequently widely published and hailed as one of the photographer’s most captivating—and courageous—bodies of work. Adding to Salgado’s roster of international accolades, the series was awarded the Oskar Barnack Award, recognizing outstanding photography on the relationship between man and the environment.

This signed and limited Collector’s Edition Kuwait: A Desert on Fire is the first monograph of this astonishing collection. In grand-scale, museum-quality reproduction, it presents more than 80 images, interlaid with transparency paper, and printed with cutting-edge High Definition Skia Photography technology. This new era of photographic printing allows, for the first time, all visible elements captured by the camera to transfer to print, achieving a visible range close to the very limits of what the human eye can perceive and a new level of three-dimensionality on the page.

Like a breathtaking exhibition in print, the result is at once a remarkable encounter with one of Salgado’s landmark series and a major document of global history and awareness. In its pristine quality, scale, and intensity, it serves to remind us, in the photographer’s own words, “that in the brutality of battle another such apocalypse is always just around the corner.” Collector’s Edition of 1,000 numbered copies, signed by Sebastião Salgado
The photographer:
Sebastião Salgado began his career as a professional photographer in Paris in 1973 and subsequently worked with the photo agencies Sygma, Gamma and Magnum Photos. In 1994 he and his wife Lélia created Amazonas images, which exclusively handles his work. Salgado’s photographic projects have been featured in many exhibitions as well as books, including Other Americas (1986), Sahel, L'Homme en détresse (1986), Workers (1993), Terra (1997), Migrations (2000), The Children (2000), Africa (2007), Exodus, Genesis (2013), Genesis (2013, Collector’s Editions), Kuwait (2016), Kuwait (Collector’s Editions).
See also Print set Sebastião Salgado Genesis (2014), Sebastião Salgado Postcard Set (2015), Sebastião Salgado. Memo game (2015).
The editor:
Lélia Wanick Salgado studied architecture and urban planning in Paris. Her interest in photography started in 1970. In the 1980s she began conceiving and designing the majority of Sebastião Salgado’s photography books and all the exhibitions of his work, including Genesis. Lélia Wanick Salgado has been the director of Amazonas Images since 1994.
EACH AND EVERY TASCHEN BOOK PLANTS A SEED!
TASCHEN is a carbon neutral publisher. Each year, they offset their annual carbon emissions with carbon credits at the Instituto Terra, a reforestation program in Minas Gerais, Brazil, founded by Lélia and Sebastião Salgado.
If you would like to support the Instituto Terra or make a donation, please visit www.institutoterra.org/donations for further information.