ROY STUART. THE LEG SHOW PHOTOS: EMBRACE YOUR FANTASIES, GETTING OFF 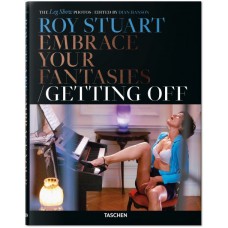 To Stuart it seemed absurd that so many young women didn’t know how to reliably give themselves orgasms. It smacked of male/female inequality. He therefore kept a number of high-powered vibrators in his studio and encouraged prospective models, during the often weeks-long educational process leading up to a photo shoot, to experiment with these machines to learn what pleased them best. When he and Hanson would confer on a shoot he might ask if masturbation would be appropriate; she came to understand this meant the model had acquired the necessary skill and wanted to demonstrate it. The answer, therefore, was always “yes”.

The volume Getting Off, second in the Embrace Your Fantasies series, represents the best of these photo sessions, accompanied by original Leg Show text by Hanson. All images are from the original transparencies, rescued from the Leg Show archives before the magazine ceased publishing in 2012. Join us once again for an exploration of 1990s sexual freedom, and a unique celebration of female empowerment.

“Stuart’s style and candor make voyeurism as respectable as you’d ever want it to be. You could leave this book out on your desk, but you probably wouldn’t get any work done.”
— Playboy

The editor and author:
Dian Hanson produced a variety of men’s magazines from 1976 to 2001, including Juggs, Outlaw Biker, and Leg Show, before becoming TASCHEN’s Sexy Book Editor. Her titles include the “body part” series, The Art of Pin-up, Psychedelic Sex and Ren Hang.