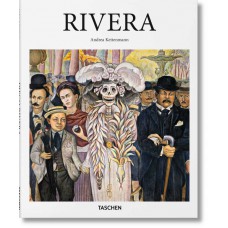 It was as a revolutionary and troublemaker that Picasso, Dalí and André Breton described the husband of Frida Kahlo, Diego Rivera, but he was also responsible for creating a public art that was both highly advanced and profoundly accessible. From 1910 Rivera lived in Europe where he absorbed the influence of Cubism. After the Mexican revolution, however, he returned to his homeland and harnessed the lessons of the European avant-garde to the needs of the Mexican people. His own murals, and those of the Mexican Muralists who followed his example, presented a utopian vision of a post-revolutionary Mexico. Rivera’s historical paintings expressed his interpretation of the revolution and its ideals, in a style that showed him returning to the pre-Columbian roots of Mexican culture, re-inventing a colourfully realistic visual idiom that could appeal directly to a largely illiterate people. This is the first study which, independently of the exhibition circuit, coherently presents the work of this extraordinary artist.

Andrea Kettenmann (born in 1959) studied art history in Gießen, Göttingen and Heidelberg before joining the art history department of the University of Hamburg. In 1986 she visited Mexico on a fellowship, and now lives there, working as a freelance art historian. She has now worked on a number of exhibitions and catalogues, including the catalogue for the retrospective on Diego Rivera, Frida Kahlo’s husband, in Detroit.