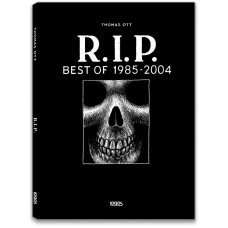 A suicide who tries and tries to die but just doesn’t manage until he becomes the victim of an atomic disaster, an astronaut surrounded by charming sea creatures in the outer space, Death fishing hats on the hook, and then car accidents, money, sex, zombies, clowns committing suicide, diabolic rabbits, tortures, war scenes and “10 ways to kill your husband”. A gallery of disturbed and at times gruesome characters inhabits the short stories published by Thomas Ott between 1985 and 2004 in Tales of Error (1989), Greetings from Hellville (1995) and Dead End (1996), plus a few unpublished works. In each of the stories that follow each other, and that we can’t just stop devouring, we know for sure that something horrible is going to happen, and there is no chance of redemption. Page after page, we nevertheless realize that the horror we witness is not due to supernatural causes but simply to human nature, with its greed, vanity and idiocy. This is a collection of short or very short comic strips that draw on various genres: horror, sci-fi, noir fiction, with a pinch of dark irony.

In R.I.P. you can find the seeds of the expressionistic power of the style of Thomas Ott, who, through the scratchboard technique, carves layers of ink with surgical accuracy, creating plates with pure white strokes on a very black background, as usual strictly without dialogues.
The title? A tribute to Lux Interior. It’s the musician, gourmet and comic book lover Martin Eric Ain who reveals it in an interesting excursus which, at the end of the book, outlines the Zurigo scene at the end of the eighties, introducing a young Thomas Ott dealing with concerts, fanzines and colourful quiff hairstyle with the Crazy Color.

The author and illustrator:
Thomas Ott was born in Zurich in 1966. After compulsory school, at the age of 16 he enrolled in a school of applied arts, and already during the years of his education he started to make his first drawings on a commission basis, while at the same time creating his own comics. After gaining a diploma in graphic design, he started to earn his living as a freelance illustrator for Swiss, German and French magazines, and very soon his first comic book, Tales Of Error, was published. In 1990 he moved to Paris, where he could gain all those experiences that would have been precluded to him in the quiet city of Zurich. Nevertheless, over time he felt the need to resume studying, this time at a film school. But he didn’t like any school in Paris, so he decided to go back to Zurich, where he enrolled in the Zurich’s School of Art and Design (HGKZ) and where he still lives. Since 2007 he has been a teacher at the Zurich University of the Arts (ZHdK).
His books for #logosedizioni are: R.I.P, Cinema Panopticum and The Number.