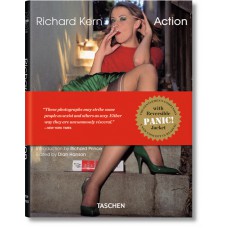 “These photographs may strike some people as sexist and others as sexy. Either way they are uncommonly visceral.” - The New York Times

Richard Kern likes real women: unpretentious, unadorned, and definitely undressed. Those who love Kern know each book is an invitation to join him in his privileged world where natural young women share their most intimate moments. Kern has never lost his boyish curiosity with girls and their secrets, so instead of posing them in sterile sets he follows them through the house—or rather his New York apartment—from backyard to kitchen to bathroom to bedroom, capturing every sexy and embarrassing moment. Action is his most revealing book yet. But we know that sometimes it can be a little risky to look at a book this revealing in public, so this special edition comes with TASCHEN’s clever new Panic Cover feature to end public censure once and for all. Simply slip off the attractive but explicit cover, reverse, and redress your book for a sedate look perfect for all occasions. For 240 pages we will still be careening through the life of Kern, accompanied by dozens of energetic, fun-loving, clothes-dropping exhibitionists, but those ladies in the park will think you’re reading The Decline and Fall of the Roman Empire! “Young women want to show the world they’re not like their man-hating women’s lib mothers,” a Kern model once told me, and these girls certainly get the point across. To further assist the young ladies in their rebellion, the book includes an hour-long DVD of original Kern film with an exclusive musical score by Thurston Moore of Sonic Youth. Way to stick it to the Mom, ladies! And thank you, Richard, you lucky dog.- Dian Hanson
This edition’s special Panic Cover is reversible to a realistic-looking academic book to keep the real contents hidden from your annoying boss or even help you impress an attractive onlooker!!!

The photographer:
Richard Kern was born in North Carolina in 1954 and has lived and worked in New York City since 1979. In the '80s he produced a series of short films that are now recognized as the central works of the movement known as the Cinema of Transgression. In the '90s he switched to still photography full time. Since 2000 he has primarily devoted himself to gallery shows and, beginning in 2005, to his VBS video series "Shot By Kern."
The author:
Richard Prince, painter, photographer and collagist was born in 1949 in the Panama Canal Zone. He is known as a critic of and commentator on American consumer culture and as a master of appropriated art. He currently lives and works in New York City.
The editor:
Dian Hanson was born in Seattle in 1951. For 25 years she produced various men’s magazines, including Puritan, Juggs and Leg Show, before becoming TASCHEN's sexy book editor in 2001. Her many books for TASCHEN include The New Erotic Photography Vol. 2 and Robert Crumb: Sketchbooks 1982-2011. She lives in Los Angeles.