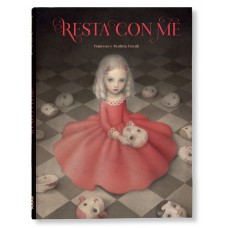 The sweet, ethereal and terrifying creatures of Nicoletta Ceccoli are back to enchant us, this time by telling us a love story. Her girls with icy and intense faces and porcelain skin are still immersed in surrealist settings, surrounded by sweets and toys, most of which look old style and vaguely disquieting. In their suspended world in pastel tones, they give a choral voice to the lines of a delicate and moving poem. Speaking as one person, they express the sweetness and fear that go along with the fulfilment of expectations.
When the long dreamt love arrives at last, we realize that we do not know how to name what we feel, that we cannot open ourselves as we have always wanted to do. It is not easy to abandon oneself to somebody else, with full confidence, lowering our defenses, dropping the many masks we have learned to wear in order to adapt to living in a world dominated by fiction. But most of all, we hesitate to leave our comfort zone, the four walls that protect our intimacy.
The magnificent images of Stay with me reflect the words of writer and director Francesco Ceccoli (Nicoletta’s brother) through a complex symbolism. Doubts and fears take the form of animated toys and dreamlike creatures that keep us in our rooms while our beloved one tries to enter and free us. From the top of a biscuit tower or intent on knitting a moon on the balcony, the girls wait, like fairytale princesses, for the prince to overcome the most demanding trials and reach them. But this is not precisely a classic fairy tale: the princesses are not a reward for brave men but have a complex inner world, they are as enigmatic as sphinxes, and they loom over men, which are often much smaller than them. To win their love, the prince doesn’t have to defeat evil warriors, dragons or other monsters – he has to overcome their doubts, learn to listen to them, slowly taking off the mask that hides their true nature.
Only then will the two lovers finally be able to leave together. But what would happen if even love were a game, a dream?

Nicoletta Ceccoli was born in the Republic of San Marino and studied at the Art School in Urbino.
Since the release of her first work in 1997, she has published many books with several international publishing houses, including Random House, Simon and Shuster, Mondadori… Her books are appreciated by readers of all ages and have been translated into several languages in Europe, Asia and South America. Her illustrations have been exhibited seven times at the Bologna Children’s Book Fair and in prestigious galleries such as CoproNason (Los Angeles), Dorothy Circus (Rome), Magic Pony (Toronto), Richard Goodall Gallery (Manchester), Roq la Rue (Seattle). In 2001, Nicoletta was awarded the Andersen prize for the best Italian illustrator of the year. She is also four-time winner of the award of excellence by the magazine Communication Arts. In 2006 she was awarded the silver medal by the NY Society of Illustrators. In 2012 Mathias Malzieu has commissioned her the character design for his animation movie Jack et la mécanique du cœur, based on his book La Mécanique du cœur and produced by Luc Besson.
Books published by #logosedizioni: Beautiful Nightmares, Daydreams and Play with me.

Francesco Ceccoli was born in San Marino and graduated in Film Studies at the DAMS – University of Bologna. He taught Italian for foreigners and taught film and video production techniques in middle schools. He has directed two documentaries: Scuderia filibusta and Romagna Nostra, le mafie sbarcano in Riviera. He currently works as a video editor at the University of the Republic of San Marino and writes film criticism and short stories.