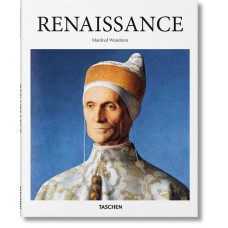 Art as we know it today would not exist without the Renaissance. Widely considered the most influential phenomenon in European art, architecture, literature, and science, the movement revolutionized the Western conception of reality and heralded the emergence of modernity out of the Middle Ages.
The Renaissance first gained momentum in Italy, at the end of the 14th century, spreading across Europe over the course of the next centuries, with dynamic epicenters in Florence, the Low Countries, and Germany. The movement found its intellectual basis in humanism, derived from classical Greek philosophy. Across art, science, literature, and politics, proponents of the Renaissance avowed that man was the “measure of all things” and determined to replace scholastic medieval confines with a revival of antiquity.
Under the influence of humanism, artists advanced anatomy and geometry to reach new feats of figurative accuracy and revolutionize renderings of perspective to reflect the human experience of place in space. In Flemish painting, artists such as Bruegel brought new techniques and an everyday sensibility to landscapes and still lifes while in Germany, Dürer and Cranach pioneered an unprecedented drama and psychology in woodcut and engraving.
From Florence to Nuremberg, Venice to Bruges, this essential introduction in TASCHEN’s Basic Art series provide a dependable foundation to the transformative reach and sweep of the Renaissance era. Through the movement’s famed luminaries and lesser-known proponents, its social and political circumstances, and its diversions and developments over time and geography, we take in an extraordinary phenomenon, transformative centuries of change that proffered individual genius, regional variety, and a wholesale reconfiguration of seeing and representing the world.
Featured artists include: Fra Angelico, Giovanni Bellini, Hieronymus Bosch, Sandro Botticelli, Pieter Brueghel, Lucas Cranach the Elder, Albrecht Dürer, El Greco, Matthias Grünewald, Hans Holbein the Younger, Fra Filippo Lippi, Masaccio, Michelangelo, Pontormo, Raphael, Tintoretto, Titian, Paolo Uccello, Veronese, and Leonardo da Vinci.

The author:
Manfred Wundram (1925–2015) studied art history, archaeology, music history, and German literature. He taught art history at Ruhr University in Bochum for many years and published widely on the Early and High Renaissance.
The editor:
Ingo F. Walther (1940–2007) was born in Berlin and studied medieval studies, literature, and art history in Frankfurt am Main and Munich. He published numerous books on the art of the Middle Ages and of the 19th and 20th centuries. Walther’s many titles for TASCHEN include Vincent van Gogh, Pablo Picasso, Art of the 20th Century, and Codices illustres.

About the series:
Each book in TASCHEN's Basic Art Genre series features: