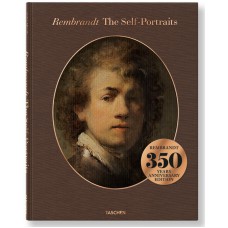 Selfies with Rembrandt
The complete self-portraiture in an XL collection

Few devotees of the form can approach Rembrandt Harmensz. van Rijn’s radical contributions to the art of the self-portrait. Challenging the conventions enshrined by his predecessors, Rembrandt transformed self portraiture into a fully realized medium capable of communicating emotional depth rather than favorably immortalizing one’s likeness in the finest trappings of luxury.

With more than 80 works spanning paintings, etchings, and drawings, the Dutchman’s lifelong practice of self-portraiture functions as a means of concretizing that which is fleeting, be it individual moments of development set against the inexorable passage of time, or the facial contortions of emotion that are gone, without a trace, as swiftly as they arrive. Across the four decades in which they were painted, one constant is particularly striking across media and styles—Rembrandt’s dedication to presenting himself from multiple perspectives, celebrating the multiplicity of the individual and championing the unfiltered portrayal of emotional expression.

Apart from the thematic concerns present within Rembrandt’s suite of self-portraits, the works themselves are rich with technical innovation and experimentation. Glints of light bathe a shoulder while whole swathes of his face blend, obscured, into darkened backdrops. Carved through a wet patina of earth-toned paint with a rough reed pen, unruly curls seem to reflect the light cast down upon them, swirling with boisterous energy befitting the surprise so often plastered across Rembrandt’s face. There is an unmistakable humanity present across the entirety of this oeuvre, each expressive brushstroke and obfuscated feature amounting to an unflinchingly honest characterization of himself, in all his foibles, contrasting states of feeling, and stages of life.

Commemorating the 350th anniversary of the artist’s death and released in tandem with a sweeping exhibition at the Rijksmuseum, this comprehensive monograph renders all of Rembrandt’s self-portraits in breathtaking XL resolution. From his first experimentations at age twenty-two to his final self-portrait painted a year before his death, this stunning collection stands testament to a life committed to revolutionizing painterly practice both in content and form.

“These are among the greatest artworks that Rembrandt ever produced. The artist depicts himself with rugged honesty.”
— BBC

The authors:
Volker Manuth studied art history, philosophy and classical archaeology in Kiel, Bonn, and Berlin. In 1987 he completed his PhD at the Freie Universität Berlin with a thesis on the iconography of Rembrandt’s Old Testament subjects. From 1988 to 1995 he was an assistant and associate Professor at the FU Berlin, and from 1995 to 2003, he held the A. Bader Chair of Northern Renaissance and Baroque Art at Queen’s University in Kingston, Ontario (Canada). Since 2003, he has been Professor of Art History at Radboud University in Nijmegen, the Netherlands.