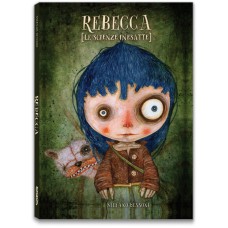 In time of war, in an isolated small town on the Ocean cost, live Giona and Rebecca. The small hamlet where they were born and grown up is inhabited by people engaged in the most peculiar occupations, all on the brink between scientific accuracy and unrestrained imagination: apocryphal zoologists, imaginary bibliographers, aesthetic teratologists, necktiologists. Giona and Rebecca are in love since they were children and would like to get married, but can’t afford a house of their own. They fulfil their dream when Giona inherits an old and crumbling house on the cliff, where little Rachel had lived many years before. But while they are working to refurbish the house, Giona starts to bump into the ghost of the little girl who apparently wants something from him…
The second volume of the series “Le scienze inesatte” (The Inexact Sciences) leaves behind the time suspension where Rachel is stucked after her death, resulting in a genuine ghost story. If the previous book was a sort of gloomy and macabre prologue, here Rachel becomes the main mechanism of an obscure device in which Rebecca and Giona are enmeshed, as well as the spectral common thread of the tale about a village far away from the rest of the world, peopled by a handful of eccentric characters. The themes emerging as the plot develops are the basics of Stefano Bessoni’s philosophy: the anomalous sciences, the wunderkammer, cryptozoology, the making of the homunculus and the obsession for the creation and capture of images. The illustrations in lively colours bring back up the unique macabre style of the author, inspiring both sympathy and horror. The grotesque human characters, with their huge heads, reddened noses and bulging eyes, are shown side by side with bizarre aquatic creatures, such as the architeuthis, the giant squids, and the Hippocampus dispettosus, a peculiar species of mischievous sea horse. All protagonists of a fascinating journey through the Small Town of Inexact Sciences, where there are no boundaries between science and imagination.

“The inexact sciences” series | A story in four volumes.
In time of war, in a town in the middle of nowhere, on the Ocean coast, once lived Giona and Rebecca. He was an illustrator and she was a restorer of old toys. One day they inherited an old crumbled house, where, many years ago, lived an anatomist devoted to strange medical practices verging on occult sciences. While they were working to refurbish their house, Giona bumped into a little ghost: Rachel, the anatomist’s daughter, who had died in tragic circumstances. The funereal child persuaded Giona to create his own wunderkammer and undertake a weird experiment. Rebecca tried to dissuade him from this dangerous plan, but this was the beginning of her “daynightmare”…
Stefano Bessoni started to conceive the “Inexact sciences” story when he was still attending the fine arts academy, and after dropping his troubled scientific studies. During that time, he had discovered Peter Greenaway’s cinema, nourished a fascination for the wunderkammer, and constantly listened to Nick Cave’s grim ballads. These influences merged with many other sources of inspiration (Jan Švankmajer, the Quay Brothers, Joel Peter Witkin…), outlining the plot of a macabre fairy tale that would accompany the author, until becoming an open page for his poetic expression. After a 30-year gestation period, this story narrated in the unique style of Stefano Bessoni is published with #logosedizioni.