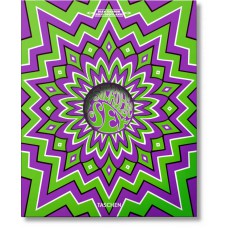 In a brief golden span between 1967 and 1972, the sexual revolution collided with recreational drug exploration to create "psychedelic sex." While the baby boomers blew their minds and danced naked in the streets, men’s magazine publishers attempted to visually recreate the wonders of LSD, project them on a canvas of nubile hippie flesh, and dish it up to men dying for a taste of free love. Way Out, Groovie, Where It’s At—each magazine title vied to convince the straight audience it offered the most authentic flower power sex trip, complete with mind-bending graphics and all-natural hippie hotties. Along the way hippies joined in the production, since what could be groovier than earning bread in your birthday suit? At its height, psychedelic sex encompassed posters, tabloids, comics, and newsstand magazines, but the most far-out examples of all were the glossy magazines from California, center of both hippie culture and the budding American porn industry. It’s these sexy, silly reminders of peace, love, and pudenda we celebrate in Psychedelic Sex. So put on your beads, tune up your sitar, and let the love-in begin!

The authors:
Eric Godtland is a self-confessed compulsive collector. Working from his bases in the Haight-Ashbury and Potrero Hill districts of San Francisco, Eric obsesses over all things girly, Hawaiian, musical and modernist. When not lusting after “cool stuff,” Eric manages musicians, bends technology to his will, writes, and begs for money.
Paul Krassner was a founder of the Youth International Party (Yippies) in 1967 and a member of Ken Kesey's Merry Pranksters. He produced The Realist, a magazine of social criticism, from 1958 to 1974, leading People magazine to name him "the father of the underground press". He is the author of 15 books; his most recent being In Praise of Indecency.
The editor:
Dian Hanson was born in Seattle in 1951. For 25 years she produced various men’s magazines, including Puritan, Juggs and Leg Show, before becoming TASCHEN’s sexy book editor in 2001. Her many books for TASCHEN include: Stanton. The Dominant Wives and Other Stories, The New Erotic Photography Vol. 2 and Robert Crumb: Sketchbooks 1982-2011. She lives in Los Angeles.