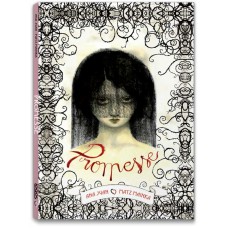 “Every morning as she woke, a new flower appeared on Ada’s skin.
Fulfilled promises seeped into her dreams. She felt she was drowning in horror..”

A feast day. An encounter. A promise of eternal love.
And then life goes back on its path, and takes you once again, and puts you again inside the mechanisms you escaped from for a while and induces forgetting.
But promises shouldn’t be forgotten or promises that one cannot keep shouldn’t be made.

And so, the life of Ada, the unlucky protagonist, is changed by the six love promises made by her lover and that, day after day, are kept. While she looses everything she has, Ada disappears inside her own terror, “where she remained, surrounded by flowers with no perfume, birds with no voice and…” in a gloomy hopeless ending.

In the third chapter of the Spaccacuore series, Ana Juan and Matz Mainka deal with the universal theme of the love story between a girl and a sailor and, putting it in a conventional background, they alter the plot into a disturbing story made  of mystery and indelible signs on the skin, meant to remind of the promises made.

Black and red colours dance on the pages of this new book by Ana Juan and they alternate as symbols of, respectively, the dullness of everyday life in its many shades of grey and the fire of passion, the fading desire and the indelible memory of love, beyond life and any physical boundary. And while the red colour slowly prevails over the pages and over Ada’s body, her eyes fade away, and get lost, drowned in an autistic universe filled with flowers, birds and solitude. So it’s the body, in its sculptural dimension that, as always, fills the page and is covered with arcane symbols in an alchemy made of magic and seduction, sensuality and transcendency. As always we can find many traces of classic paintings in Ana Juan’s work, with more or less evident hints at the great masters of the past, among which stands out the tender couple of lovers floating in the air by Marc Chagall: “Marc e Bella”.