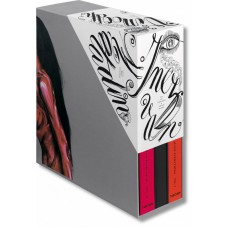 Two artists, one vision
The enigmatic and genre-defying work of Inez van Lamsweerde and Vinoodh Matadin

“It is typical of the photographic art of van Lamsweerde and Matadin that they urge their image making to de-stabilise the pristine surfaces expected of consumer culture; to this end they make use, in turn, of the Gothic, inscrutability, androgyny, comedy, eroticism, surrealism, fantasy, montage, cinema, replication, image manipulation, Pop art, fetishism and art historical nuance.” —Michael Bracewell, from the introduction

Inez van Lamsweerde and Vinoodh Matadin’s work has graced the walls and pages of some of the world’s finest galleries and fashion magazines, and if it is surprising that their photographs easily float between these worlds, it is by virtue of their ease in creating imagery that seeks homes in both culturally elite and mainstream outlets. For some of their photographs, such as their portrait of Björk or campaign for Givenchy, van Lamsweerde and Matadin have worked in collaboration with the art directors M/M (Paris), who have also designed this sumptuous two-volume retrospective set that looks back at “pretty much everything” that the photographers have been working on for over two decades and has brought them to the forefront in the fields of both art and fashion.

The designer:
M/M (Paris) is an art and design partnership consisting of Mathias Augustyniak and Michael Amzalag. Their portfolio includes art direction and collaborations with Björk, Balenciaga, and Inez van Lamsweerde & Vinoodh Matadin, as well as with magazines including Vogue Paris, Interview, and Purple Fashion.

Penny Martin is Editor in Chief of The Gentlewoman magazine and Chair of Fashion Imagery at London College of Fashion, University of the Arts London. Previously, she was Editor in Chief of SHOWstudio.com from 2001–08. Penny has curated several exhibitions – most recently, When You’re A Boy: men’s fashion styled by Simon Foxton at The Photographers’ Gallery, London – and is a contributor to numerous magazines and newspapers including Fantastic Man, W and The Independent.

Michael Bracewell was born in London in 1958 and has written widely on modern and contemporary art and culture. His more recent publications include Richard Hamilton: Late Works, and Damien Hirst: The Complete Psalm Paintings. He has contributed to The Faber Book of Pop and The Penguin Book of Twentieth-Century Fashion Writing.

Olivier Zahm, founder and co-editor of Purple Magazine is an internationally acclaimed writer, art curator and fashion theorist. He lives in Paris.

Bruce Sterling is author, journalist, editor, and critic. His nonfiction works include The Hacker Crackdown: Law And Disorder on the Electronic Frontier (1992), Tomorrow Now: Envisioning the Next Fifty Years (2003), and Shaping Things (2005).

Antony is a musician and artist from New York. He performs with his group Antony and the Johnsons. In 2010 he released an album and a book of drawings called Swanlights. Much of Hegarty's recent work addresses his relationship to the natural world.