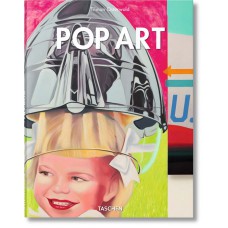 Soup cans and Whaam!
The makers and shapers of Pop Art

Peaking in the 1960s, Pop Art began as a revolt against mainstream approaches to art and culture and evolved into a wholesale interrogation of modern society, consumer culture, and the role of the artist and artwork.
Pop artists primary provocation was to defy ideas of the artistic canon or “originality” by integrating mass market imagery into their works. Whether advertising slogans, famed Hollywood faces, comic strip style characters, or the packaging of consumer products, the likes of Robert Rauschenberg, Claes Oldenburg, Andy Warhol, and Roy Lichtenstein knowingly reproduced mundane, everyday images from popular culture.
At the same time, Pop Art reduced the role of the individual and challenged the notion of originality by deploying mass production techniques such as screen printing. Like a hall of mirrors, the resulting works came to interrogate both the ideas and desires of contemporary culture, and its state of simulacra, whereby images, substitutes, and representations come to define the experience of ‘reality’.
In this book, Tilman Osterwold explores the styles, sources, and stars of the Pop Art phenomenon. From Lichtenstein’s comic book aesthetics to Warhol’s images of Marilyn, it explores how a movement that interrogated the icons of its time came to produce icons of its own.

"... a must-read for anyone who works in the modern media or is interested in this fascinating bastard child of "serious" art. Double thumbs up!."
Blunt Magazine, St Leonards, Australia

The author:
Tilman Osterwold studied art history, archaeology, philosophy, and psychology, obtaining his PhD in art history in 1969. After teaching at university for many years, he was director of the Württembergischer Kunstverein from 1973 to 1993. He has organized numerous exhibitions and published widely on the subject of 20th century art and culture.