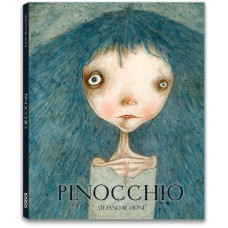 As in Alice Under Ground, Stefano Bessoni recovers one of the most beloved characters of his childhood in order to personalize his deeds with a lively, flamboyant narration and his own recognizable funny, macabre, images. His eyes are those of a Victorian scientist passionate about insects, human anatomy, skeletons, ghosts and photography. Far from strictly following the well-known deeds told by Collodi, Bessoni puts the puppet on the stage and surrounds him with a weird circus of characters, which he provides with everything his mind has brought him to imagine beyond the restrictions of the written text. Bessoni’s Pinocchio feeds on suggestions from the famous television drama by Luigi Comencini and Enrico Mazzanti and Carlo Chiostri’s illustrations, combined with hints of Shelley and Lombroso. Probably born of a big mandrake root grown at the feet of a gallows, Pinocchio is a bizarre creature bearing the anatomical stigmata of a “born criminal” – after Lombroso’s definition – and the disturbing otherness of Mary Shelley’s Frankenstein. As such, he joins the crowd of beings created by subverting the laws of nature, necessarily unhappy and freak at all costs. Together with the other characters of the tale, they build a fascinating gallery of macabre creatures: Geppetto has become stooped, his teeth are missing and his nose is redder than ever; the emerald green Talking Cricket wears a top hat, his eyes are super-disproportioned and his teeth broken down; Mangiafoco is a mountain of hair, moustache and beard from which two evil eyes peep out, together with the inevitable big teeth; the Fairy with Turquoise Hair is a skinny young girl with enormous hair, who is fond of Pinocchio and even more of his long and turgid nose. A reinterpretation of a great classic tale that goes beyond the boundaries of children narrative and claims its own status as a gothic or romantic literary work, following the steps of Hoffman and Poe.

Stefano Bessoni is a director, illustrator, and stop-motion animator. He was born in 1965 in Rome, where he graduated from the Academy of Fine Arts. Since 1989 he has been making many experimental films, video and theatre installations, and documentary films. In the 1990s he worked for many TV production companies as camera operator, cinematographer, and film editor. He taught film directing at the NUCT (Roma Film Academy) in Cinecittà and at the Griffith Academy in Rome. He also teaches many workshops on illustration and stop-motion animation at schools and festivals in Italy and abroad.