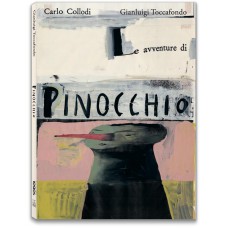 Pinocchio lives for ever in our hearts and minds.
Collodi’s classic reinterpreted by Gianluigi Toccafondo, 25 pictures illustrating the tale’s most important scenes and a DVD featuring a short film about the famous puppet’s story in the most distinctive Toccafondo style. A masterpiece worthy of figuring in a museum now available in the bookshops.

Gianluigi Toccafondo, born in San Marino, lives and works in Bologna. He has directed a number of short animated films, commercials and opening sequences for TV programs, including Carosello and Tunnel (RAI television). The opening intro for the 1999 Venice International Film Festival bears his signature, like the animation sequences in Ridley Scott’s Robin Hood (2010).