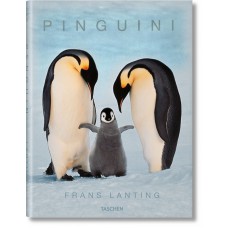 Penguin is a celebration of the nature and beauty of penguins as expressed through the exquisite images and unique personal stories of master photographer and naturalist Frans Lanting. In a remarkable portfolio of photographs made during three expeditions to the icy kingdoms of penguins, he reveals both the amazing natural history and the irresistible appeal of the most human of birds. He first traveled to isolated slivers of land in the Falkland Islands to cover the lives of "little penguins" - rock-hoppers, Magellanics, and gentoos - and then made a rare circumnavigation of South Georgia by yacht, going ashore to camp among colonies of king penguins and capture the summer rush of birds breeding and feeding before the harsh deprivations of winter set in. Finally he flew to the edge of Antarctica and camped on the sea ice for a month to document the epic life story of the emperor penguin, which survives at the outer limits of life. More than 110 photographs illustrate this moving portrayal of the birds many people feel they already know - but will see in a powerful new perspective through Frans Lanting’s eyes. "This book is a personal interpretation of the penguins I met, rather than a natural history of all penguins," Frans Lanting writes. "I wanted to create an impresson of who these penguins are and what they go through. I hope my work will be seen as an homage to the individual within them all."

"As a chronicler of natural history today, Frans Lanting is a singular extraordinary talent. He has the mind of a scientist, the heart of a hunter, and the eyes of a poet."
—National Geographic, Washington