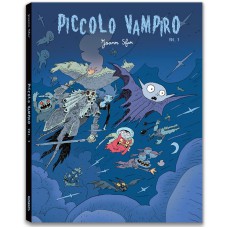 THE FIRST VOLUME OF THIS SERIES HAS WON THE ANDERSEN PRIZE 2019 FOR BEST COMIC BOOK.

The adventures of the funniest ever little vampire are back!
In this third volume, Joann Sfar takes a step backward and tells us some stories about Piccolo Vampiro’s past and his odd family. We are going to learn how it happened that his mother and he became vampires, we will witness the whirlwind romance between Madame Pandora and the Captain of the Dead… and we are going to meet the Gibbous, a ruthless and rancorous enemy who has been trying to exterminate Piccolo Vampiro and his parents for centuries. Forced to hide inside the haunted house, shielded by and invisible, powerful protective barrier, Madame Pandora and the Captain of the Dead erased every memory of the sketchy persecutor from their child’s mind. Unaware of the tremendous danger, Piccolo Vampiro can’t understand why he is not allowed to go out and he’s champing at the bit to go to town and make friends with other children his age. With the complicity of his monstrous friends, he takes advantage of the movie night at the haunted house to sneak off with Pomodoro and fly to the school… where he will meet Michele, as all Sfar’s readers already know. Piccolo Vampiro is over the moon with joy: he’s got a friend, at last! But unfortunately, his getaways didn’t go unnoticed and the old enemy’s threat is looming again over the haunted house’s occupants… and even over Michele!

Nearly twenty years after the first issue of Piccolo Vampiro, Joann Sfar goes back to the beginning of the story to rewrite it, together with Sandrina Jardel (whose name is not by chance the same as Michele’s classmate). The readers of Piccolo Vampiro 1 will certainly appreciate this new version of the story, a bit more gothic than the previous one but always irresistibly ironic, and will find some scenes they already know but seen from a different point of view.
#logosedizioni collects in a single volume the whole new series, whose third chapter, still unpublished, will be issued simultaneously in Italy and in France. A page-turner book, a new story in three acts told by Joann Sfar’s soft and playful touch and Brigitte Findakly’s cute colours, which is going to become an animated feature film. Drawing upon the Jewish stories that his grandmother once told him, Sfar manages to build a universe full of fantasy and tenderness that will make both children and grown-ups happy.