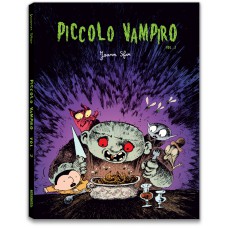 THE FIRST VOLUME OF THIS SERIES HAS WON THE ANDERSEN PRIZE 2019 FOR BEST COMIC BOOK.

Piccolo Vampiro (Little Vampire) and his whimsical friends are back with four new, thrilling adventures!
In Piccolo Vampiro e la casa che sembrava normale (Little Vampire and the house that looked normal) the little vampire sneaks into an abandoned house, where he meets a new, quirky, friend. They accidentally end up in a limbo between worlds, where they detect a shady arms trade… and like all those who know too much, they are taken prisoners! Luckily, our hero can turn into a mouse and slip away to find help…
In Piccolo Vampiro e la zuppa di cacca (Little Vampire and the poo soup), the funny gang deals with Margherita’s weird way of cooking, only to find out that his farts stink so much that they wake up the dead… who in fact raise up from their graves and go in procession to the castle, demanding a cup of tea! Piccolo Vampiro and his friends have no choice but to indulge their request…
In Piccolo Vampiro e i Babbi Natale verdi (Little Vampire and the green Santas) it’s Christmas at the haunted castle! Monsters, ghosts and vampires get ready for the holy night and, to his surprise, Michele finds out that everybody is looking forward to Santa Claus… But Santa doesn’t exist! … Or does he? The only way to find out is to stay awake on Christmas eve… but their curiosity may prove to be very dangerous!
Piccolo Vampiro e il sogno di Tokyo (Little Vampire and the Tokyo dream) is Joann Sfar’s tribute to Little Nemo by Winsor McCay, to celebrate the 100th anniversary of the little big dreamer of the world of comics. Inspired by the mangas he has borrowed from Michele, Little Vampire dreams of travelling to Tokyo… where he meets heaps of polite, kind and mushy characters, but soon his dream turns into a nightmare!
Four new exciting stories, told in the light and playful style of Joann Sfar and with Walter’s beautiful colours. Drawing upon the Jewish stories that his grandmother once told him, Sfar manages to build a universe full of fantasy and tenderness that will make both children and grown-ups happy.