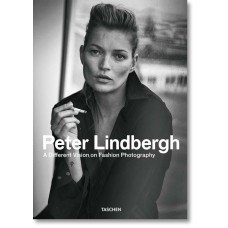 When German photographer Peter Lindbergh shot five young models in downtown New York City in 1989, he produced not only the iconic British Vogue January 1990 cover but also the birth certificate of the supermodels. The image didn’t just bring revered faces together for the first time; it marked the beginning of a new fashion era and a new understanding of female beauty.
Coinciding with his major retrospective at the Kunsthal in Rotterdam, The Netherlands, this book gathers more than 400 images from four decades of Lindbergh’s photography to celebrate his unique and gamechanging storytelling. Raw and seductive at once, his trademark monochrome pictures brought a new romantic and narrative vision to art and fashion.
Considered a pioneer in photography, he introduced a form of new realism by redefining the standards of beauty with timeless images. Whether in single portraits or poetic compositions of figure and landscape, the imagery is inflected by cinematic language and by a play with female archetypes as his subjects adopt the guise of dancers, actresses, heroines, and femme fatales. At the same time, Lindbergh brings a humanist approach to photography, privileging natural and authentic beauty in an era of pervasive retouching, capturing spirit and personality as much as looks, and celebrating the elegance and sensuality of older women.
In a testimony to Lindbergh’s illustrious status in the fashion world, his images are contextualised by commentaries from collaborators such as Jean Paul Gaultier, Nicole Kidman, Grace Coddington, Cindy Crawford, and Anna Wintour, who chose Lindbergh to shoot her first US Vogue cover. Their tributes explain what makes Lindbergh’s images so unique and powerful.

The photographer:
Peter Lindbergh was born in Lissa, Germany, in 1944. His celebrated work is part of many permanent collections of fine art museums and has been presented in prestigious museums and galleries around the world, from the Victoria & Albert Museum in London to Centre Pompidou in Paris, as well as in solo exhibitions at Hamburger Bahnhof, Museum für Gegenwart, Berlin; Bunkamura Museum of Art, Tokyo; and the Pushkin Museum of Fine Arts, Moscow. Lindbergh lives and works between Paris, New York, and Arles.

The author:
Thierry-Maxime Loriot was born in Québec City, Canada, in 1976. After working more than ten years in the fashion industry between New York, Milan, and Paris, he curated the exhibition The Fashion World of Jean Paul Gaultier: From the Sidewalk to the Catwalk, a blockbuster show seen by more than two million visitors. He collaborates with different magazines and fine art museums around the world on fashion and photography projects.

PETER LINDBERGH. SHADOWS ON THE WALL
80.00€
Add to Cart