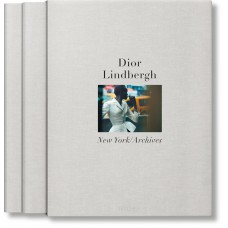 Given carte blanche to shoot 80 vintage Dior dresses including pieces hand-sewn by Christian Dior, Lindbergh set the scene in the busy streets of New York, bringing priceless garments from the Dior Museum’s vaults to Manhattan. In this XL set, Vol. 1 gathers some 400 never-before-published images from the legendary shoot, while Vol. 2 traces Lindbergh’s photographs of Dior pieces over the past 40 years.

“While Haute Couture is closely linked with an idea of perfection and the mastery of every last detail, I wanted to transport 70 years of Dior creations to an unexpected place. The streets of New York embody the most contrasting background to reveal unforeseen emotions.”
— Peter Lindbergh, 2019

The photographer:
Peter Lindbergh (1944-2019) was born in Leszno (today Poland). His celebrated work is part of many permanent collections of fine art museums and has been presented in prestigious museums and galleries around the world, from the Victoria & Albert Museum in London to Centre Pompidou in Paris, as well as in solo exhibitions at Hamburger Bahnhof, Museum für Gegenwart, Berlin; Bunkamura Museum of Art, Tokyo; and the Pushkin Museum of Fine Arts, Moscow.

Texts by:
Martin Harrison is a historian of art and photography and an exhibition curator. He worked with Linda McCartney on Roadworks (1996), Light from Within (2001), and her exhibitions at the National Museum of Photography, Film and Television in Bradford and the International Center of Photography in New York. He has published widely on photography and, most recently, on the paintings of Francis Bacon.