PARIS. PORTRAIT OF A CITY 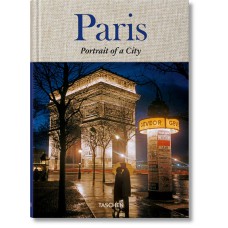 Described by Goethe as “universal city where every step upon a bridge or a square recalls a great past, where a fragment of history is unrolled at the corner of every street”, Paris is as rich in its two millennia of history as it is in its beauty, its romance, and its art.
It was on the banks of the Seine that Niépce and Daguerre officially gave birth to the new art of photography, and in this evocative tapestry of images, Paris: Portrait of a City leads us through the city’s photographic, as well as its cultural, architectural and civic history. The book features some 500 pictures, bringing together past and present, the monumental and the everyday, faces and vistas. Images captured by the most illustrious photographers—Daguerre, Marville, Atget, Lartigue, Brassaï, Kertész, Ronis, Doisneau, Cartier-Bresson, sit alongside unknown photographers whose work somehow bottles a little of that “Parisian air,” in all its sensuality, its poetry and its light.

The editor and author:
Jean Claude Gautrand, born in 1932, is one of France’s most distinguished experts on photography. An active photographer since 1960, he has also made a name for himself as a historian, journalist and critic, with numerous publications. He is the author of the TASCHEN books Paris mon amour (1999), Doisneau (2003), Brassaï (2004), Ronis (2005) and Paris, Portrait of a City (2011).