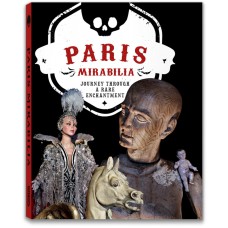 We all know the splendour of the Louvre, the multitudes climbing up the Tour Eiffel, the crowded steps in Montmartre, the Mona Lisa’s mocking smile, or the luxury shopping in the Champs-Elysées, but, besides its main attractions, the “city of the lights” scrupulously hides a dark side many people have yet to discover. Actually, the French capital has always taken a liking in the extraordinary.

As Balzac wrote in Le Père Goriot, “Paris is in truth an ocean that no line can plumb. You may survey its surface and describe it; but no matter how numerous and painstaking the toilers in this sea, there will always be lonely and unexplored regions in its depths, caverns unknown, flowers and pearls and monsters of the deep overlooked or forgotten by the divers of literature”. If an authentic modern flaneur somehow existed nowadays – though equipped with a camera, smartphone or tablet – someone who could drift along the Seine docks, down the wide boulevards or in the deepest alleys, maybe at the most unlikely hours, just to discover unusual details, peculiar boutiques, hidden corners… choosing his route as suggested by Guy Debord: not based on what you know, but based on what you see… then, that stroller would experience the sudden and alienating feeling of walking in an unknown city.

This volume invites you to break through the surface of a such a mystery thanks to fifteen fascinating experiences, in their own distinct way; fifteen invitations to wonder, to begin to unveil the secrets dotting the flashing lights of the Ville Lumière. You will admire an enormous collection of gramophones and vintage record players; you will enter the threshold of a museum exhibiting two-headed calves and skinned bodies; you will stroll down the headstone rows of the pet cemetery; you will explore the ancient and naughty eroticism of the Belle Époque; you will be charmed by wizards and automated mannequins, weird shops full of stuffed dead animals and wonderful XIX century carousels. Hidden treasures waiting to be discovered by the contemporary divers – if not of literature, as in Balzac’s oeuvre – of the marvel world, just like the readers of our #BizzarroBazar series. Fifteen unusual and charming landmarks.

Also available in Italian and French