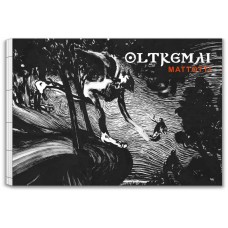 “I did this series of drawings after finishing my work on Hänsel & Gretel. The two protagonists of the fairytale had escaped from the wood, leaving the stage to other inhabitants of that archetypal forest. I began to create narrative images evoked in the moment of their making, working directly with brush and ink on the paper, without any sketches or preliminaries. Paradoxically, the extent of the creative freedom I allowed myself obliged me to intensify my concentration on the drawing’s subject and composition. Everything had to be contained, to take place, on that single sheet. I get the feeling that in these situations my mind focuses on listening to distant narrative echoes of stories, symbols and images glimpsed in other periods of my life. It digs down into my memory and trawls up images that have remained engraved in my personal image gallery, creating strange associations, mingling myths, characters and places. Little by little, a fairytale universe devoid of precise references to pre-existing stories began to take shape: a highly personal image narrative, where light and darkness play leading roles.”
Lorenzo Mattotti

“OLTREMAI tells the story of storytelling, not with words but through figures, as they emerge from unplanned drawings trawled up from the unconscious. The figuration emerges from a forest, a tangled mass of black ink and light (where the paper has been spared the invasion of ink). White signs and black signs, entwining and grappling with one another, conjure up figures. In these improvised stories in black and white, no recognizable filter limits the artist. They don’t express texts, but terrible and innocent stories, like those of dreams: not all of them can be clarified, or memorized or dominated. Truer than truth, in other words, because they express the artist’s most elusive imagination, so deeply his that they render any observer equally free to feel and vibrate, and to imagine images against his or her own dim background of mystery.”
Luigi Ficacci

This work by Lorenzo Mattotti was at the centre of the OLTREMAI exhibition, on display at the Pinacoteca Nazionale di Bologna from February 22 to April 7, 2013, in conjunction with The BilBolBul International Comics Festival and the Bologna Children’s Bookfair; it was on show at the exhibition FAVOLE E MISTERI at the FAR in Rimini from May 25 to July 28, 2013; at the 8th edition of the KomiksFEST in Praga at the Italian Cultural Institute from October 30 to November 3, 2013; at the INFINI solo exhibition at the Fonds Hélène et Edouard Leclerc pour la Culture in Landerneau in France from December 8, 2015 to March 6, 2016; at the Lucerne annual COMICS FESTIVAL at the Kunstmuseum from April 16 to July 3, 2016. It will be soon on display at the SCONFINI solo exhibition which will be opened at Villa Manin on October 28, 2016. The book is now reprinted as a re-sized trade edition, smaller and therefore easier to handle.