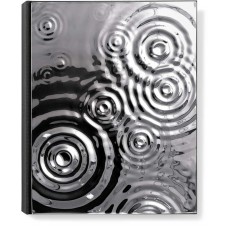 Concepts in space
The experimental art of Olafur Eliasson

An encyclopedic vision on Olafur Eliasson’s art and architecture in xl-format. Limited to 200 numbered copies, delivered in a luxurious clamshell box and each signed by the artist, the Art Edition features a special cover custom made by Olafur Eliasson: a high gloss polished and cold formed steel plate imitating the prismatic effect of raindrops falling into water.

Studio Olafur Eliasson is an experimental laboratory located in Berlin. Led by renowned Danish-Icelandic artist Olafur Eliasson, it functions as an interdisciplinary space, generating fresh dialogues between art and its surroundings.

This rich sourcebook enables the reader to delve into the corners and crevices of the Studio’s diverse projects. The key concepts behind the works are presented alphabetically, and unfold in the course of short conversations with the artist.

The majority of Eliasson’s thought-provoking installations, photographs, sculptures, and architectural projects to date is included, with additional material focusing on the research processes at Studio Olafur Eliasson. The introduction is provided by the noted art historian Philip Ursprung, who also participates in the conversations.

The artist:
Olafur Eliasson, born 1967 in Copenhagen, of Icelandic parentage, studied at The Royal Danish Academy of Fine Arts, Copenhagen, from 1989 to 1995. Early in his career he moved to Germany, establishing Studio Olafur Eliasson in Berlin. Internationally acclaimed, Eliasson lives and works in Copenhagen and Berlin.

The author:
Philip Ursprung is professor of Art and Architecture at the University of Zurich. He is the editor of Herzog & de Meuron: Natural History, author of Grenzen der Kunst: Allan Kaprow und das Happening, Robert Smithson und die Land Art, and also works as a curator.