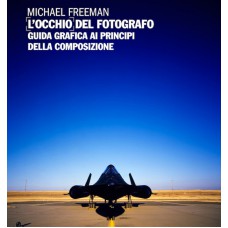 A new approach to learning composition

Taking a new look at composition, the theme of his best-selling classic L’occhio del fotografo, Michael Freeman now explores the visual mechanics of photography in its own native terms. Lushly illustrated with straight-to-the-point diagrams and graphic deconstructions, this book speaks in that intuitive, visual, and instantaneous language in which photographers think and work. Each section is organised into discrete units that articulate a working method for communicating particular ideas and capturing certain subjects. Dive into beautiful images and explore how each compositional element is placed and arranged in relationship to each other. Examine the outtakes from each shoot to understand why one particular image succeeded, compared to those shot before and after. Track the viewer’s eye as it moves throughout the photo to see the optical dynamics held within each frame. And most of all, internalise this graphic language so you can instantly recognise amazing and powerful shots as they appear in your own viewfinder.