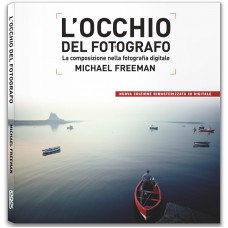 Design is the single most important factor in creating a successful photograph. The ability to see the potential for a strong picture, then to organise the graphic elements into an effective, compelling composition has always been one of the critical skills in making photographs.
Since its first publication in 2007, The Photographer’s Eye has established itself as the essential work on this subject, and a key book for modern photographers, with hundreds of thousands of copies sold.  It explores all the traditional approaches to composition and design and, crucially, also covers digital possibilities like stitching and HDR.
In keeping with the book’s purpose – to expand the possibilities of the medium without compromising the photographer’s vision – this edition has been completely remastered to celebrate its tenth anniversary. All-new digital reproduction, not available when the book first came out, gives the author’s photography a fresh new look, while retaining the know-how that has given a generation of photographers new purpose.

Michael Freeman is perhaps the most widely published authority on photography in the world, not to mention a successful photographer in his own right. This recognition represents the wisdom that only four decades of editorial and commercial work can bring.  A graduate of Brasenose College, Oxford University, Freeman first worked in London’s advertising industry during the period of exciting change that took place in the 60s. In 1970, he made the life-changing decision to travel up the Amazon river with two second-hand cameras, and when many of the resulting pictures were published Time-Life, he chose to embark on a full-time photographic career.
Since then, Freeman has consolidated his reputation as one of the world’s leading reportage photographers, working for clients that include all the globe’s major magazines, most notably Smithsonian magazine (for which he has shot more than 40 stories). Of his many books, which have sold over 4 million copies worldwide, more than 60 titles are on the practice of photography. For this photographic educational work, he was awarded the Prix Louis Philippe Clerc by the French Ministry of Culture
Freeman’s books on photography, including The Photographer’s Eye, have been translated into 27 languages.

Design is the single most important factor in creating successful photographs. The ability to see the potential for a strong picture and then organise the graphic elements into an effective, compelling composition has always been one of the key skills in taking photographs. Of course, digital photography has brought a new, exciting aspect to design first because the instant feedback from a digital camera allows immediate appraisal and improvement, and second because image-editing tools make it possible to alter and enhance the design after the shutter has been pressed. This book shows how anyone can develop an eye for 'seeing' great digital photos. The Photographer's Eye explores all the traditional approaches to composition and design, but crucially it also addresses digital techniques that extend the possibilities of the medium without compromising the photographer's vision. - See more at: http://www.ilex-press.com/books/the-photographers-eye/#sthash.25lhYFhC.dpuf