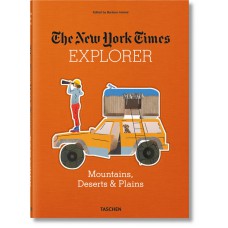 Traveling Extremes
Journeys of discovery into the wilds

Whether it’s the flower-filled meadows of the Dolomites or a blanket of stars above Chile’s Elqui Valley, set forth and share in the discoveries of Mountains, Deserts, & Plains, a collection of 25 dream destinations in TASCHEN’s Explorer series with The New York Times.
Discover the deliciously intricate geology of China’s Wulingyuan National Park with Simon Winchester, the otherworldly beauty of Namibia with Elinor Burkett, or the sunrise serenity of the Sawtooth Valley in Idaho. The Times writers are your guides, and the wealth of color photographs that accompany their writing capture the catch-your-breath awe of each spectacular location.
The Explorer series takes travel beyond the obvious with adventures in exotic places and new perspectives in familiar ones, all based on the distinguished travel journalism in The New York Times. Each journey features a first-person narrative and documentary photography that capture the unique personality of the destination—as well as practical information to help get you on your way. Edited by Barbara Ireland, whose 36 Hours travel series has been a TASCHEN best seller, the Explorer series launches with Beaches, Islands, & Coasts and Mountains, Deserts, & Plains. Upcoming volumes include Urban Adventures and Road, Rail, & Trail.

The editor:
Barbara Ireland, a writer and editor based in western New York State, is a former deputy travel editor and deputy Op-Ed page editor at The New York Times. While on the Times staff, she commissioned and edited many 36 Hours columns and wrote a few herself. She is a graduate of Cornell University and was a John S. Knight journalism fellow at Stanford University.