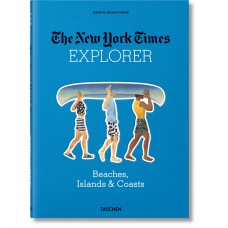 At the Shore
Journeys of discovery from coast to cove

Whether it’s a languid day on the postcard-perfect bays of the Maldives, a swim to the tiny monastery island in Italy’s Lago d’Orta, or a chocolate tour of the Caribbean, dive in and share the discoveries of Beaches, Islands, & Coasts.Part of TASCHEN’s Explorer series with The New York Times, this book tells the stories of 25 dream trips for curious minds, where the water is always only a pebble’s throw away.
Motor past pink sands and bougainvillea in Bermuda with Andrew McCarthy, walk the rugged trail where Wales meets the sea with Dominique Browning, or skip Tuscany’s countryside in favor of its inviting coastline with Frank Bruni. The Times writers are your guides, and the wealth of color photographs that accompany their writing capture the soul-nourishing magic of places where the water rolls up to meet the land.
The Explorer series takes travel beyond the obvious with adventures in exotic places and new perspectives in familiar ones, all based on the distinguished travel journalism in The New York Times. Each journey features a first-person narrative and documentary photography that capture the unique personality of the destination—as well as practical information to help get you on your way. Edited by Barbara Ireland, whose 36 Hours travel series has been a TASCHEN best seller, the Explorer series launches with Beaches, Islands, & Coasts and Mountains, Deserts, & Plains. Upcoming volumes include Urban Adventures and Road, Rail, & Trail.

The editor:
Barbara Ireland, a writer and editor based in western New York State, is a former deputy travel editor and deputy Op-Ed page editor at The New York Times. While on the Times staff, she commissioned and edited many 36 Hours columns and wrote a few herself. She is a graduate of Cornell University and was a John S. Knight journalism fellow at Stanford University.