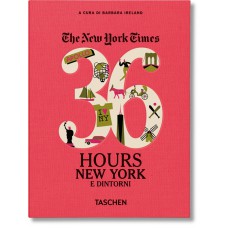 New York remains one of the most magnetic states in North America. Amid all the excitement, diversity, and history, navigating your way around can be a dizzying experience, especially if you only have a Friday through Sunday to spare. Luckily, this regional special in TASCHEN’s best-selling 36 Hours series with The New York Times excels in making the most out of a tight schedule so you can become a savvy New York explorer each weekend.
From the latest glamorous happenings in Manhattan to lesser-known gems in the outlying boroughs of Brooklyn, Queens, and Harlem, the book’s crack team of writers uncover a dazzling array of city charms, even for the seasoned New Yorker. Farther afield, discover the beauties of the Hamptons and the Hudson Valley, tune your ear to the roar of Niagara Falls, and hop down to Washington to absorb its one-of-a-kind, politics-obsessed culture.