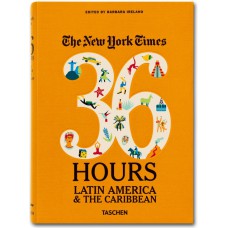 Covering a span of terrain stretching from the Atlantic to the Pacific Ocean across the Northern and Southern Hemispheres, Latin America and the Caribbean harbor a wealth of enticing destinations. Stylishly written and carefully researched, this updated and expanded collection of the New York Times' popular 36 Hours feature offers you 60 well-crafted itineraries for quick but memorable trips, accompanied by hundreds of color photographs to fire your imagination. Explore the crystal clear waters of the Bahamas; try your hand at surfing in Costa Rica, tango in Buenos Aires; discover frenetic megacities, ancient ruins, tranquil beaches, and tropical rainforests...from the expected (the cloud forest in Costa Rica, snorkeling in the Cayman Islands, urban beach culture at Ipanema) to the unexpected (a concert hall in Trinidad for steel-band music, the Colombian walled city of Cartagena, an Antiguan peak named for Barack Obama)—it’s all here in this handsomely designed and illustrated book.