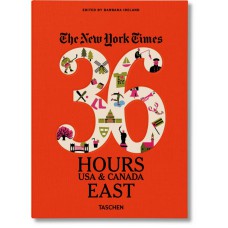 Ease through the East
Adventures in Eastern North America

Exploring the expanse of North America that looks toward the Atlantic Ocean means experiencing a kaleidoscope of picturesque towns, rural idylls, pulsating cities, and some of the most dramatic natural scenery on the continent. Such a diversity of riches can be overwhelming, particularly if you only have a weekend to spare.
Luckily, the expert writers of The New York Times are at hand with this new East Coast and Beyond special in the best selling 36 Hours series, designed exclusively with a Friday to Sunday schedule in mind. Take your pick of intriguing destinations from Quebec down to Havana, via postcard New England, frenetic Northeast cities, and slow-paced old towns of the South. Then hop inland to Chicago, Nashville, and New Orleans. Through palm-shaded beach resorts, history-drenched valleys, and Manhattan boutiques, you’ll find the ultimate edit of unmissable food and drink, cultural highlights, natural beauty, and the hottest neighborhood venues.