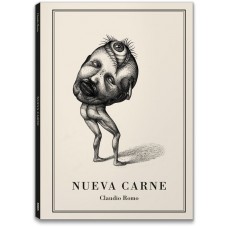 Our bodies are unknowable territories. We can dismantle them, cut them up into ever smaller parts, rummage in their entrails… and their secret will continue to escape us.
We stare at our hands. We explore our teeth with our tongues. We touch our hair. Is this what we are?
Our body is fluid, and keeps finding itself somehow “beyond” its apparent form (trans-formed), ready to blend with different entities, to turn into something else. Thanks to the confusionary fusion between the organical and the mechanical, between biology and technology, the body is abandoning its materiality and blending itself with the infinite immaterial projections and ramifications of Internet, having become a synapse in the immense cerebral mass spreading over the surface of the Earth. Is there any sense left in trying to define what is human, in trying to tame its delirious flesh?

Ironically described as “anatomical”, Claudio Romo’s pictures celebrate de facto the collapse of anatomy. Faced with the deflagration of the humani corporis fabrica, a reluctant and resigned Vesalius renounces his dissecting tools for good. Thought projects itself outside physical limits, so meanwhile flesh, no longer after surveillance, can finally become surreal, and start to dream furiously. Drawn with black ink to create nettings that evoke a digital dimension, these illustrations suggest that the dream may be a nightmare, turning into an apocalypse where the virtual becomes real erasing all the borders that we basically find reassuring. But it is up to us to decide whether to welcome or not the most momentous metamorphosis that our species have ever experienced. Will we remain terrified in front of the idea of losing our old physical envelopes in which we thought our identity was rooted? Or will we set them ablaze, abandoning ourselves to ecstasy and transfiguration?
Enriched by an introduction by Ivan Cenzi of #BizzarroBazar, this futuristic, philosophical and spiritual work forces us to face ourselves while it bewitches and unsettles us with its powerful vision.

The author:
Claudio Andrés Salvador Francisco Romo Torres (Claudio Romo) is an illustrator and writer born in the port city of Talcahuano, Chile, in 1968. He studied Plastic Arts at the Universidad de Concepción and got a Master degree in Visual Arts with a specialization in Graphic Design at the Academia de San Carlos, Escuela Nacional de Artes Plásticas, UNAM México. He currently teaches graphic design and drawing at the Universidad de Concepción, Chile.
His books for #logosedizioni: A Journey in the Phantasmagorical Garden of Apparitio Albinus (also available in Italian), Nueva Carne, The Book of Imprudent Flora (also available in Italian and Spanish) Tavola smeraldina (also available in Italian and Spanish) and Bestiario Mexicano.

Introduction by:
Ivan Cenzi was born in 1978 in Asiago (VI). After graduating in Communication Studies at the University of Siena and specializing in Film direction at Cinecittà, he now works as a film director and producer for Interzone Visions, an independent company he has founded himself. Explorer of the uncanny and collector of curiosities, since 2009 he has been the editor of #BizzarroBazar, a blog that deals with anything weird, macabre and marvellous, which in a short time has become the Italian landmark for this kind of topics. Over the years #BizzarroBazar has been dealing with Wunderkammern, anatomical museums and collections, the history of circus and traveling fairs, the early days of science, photography, classic and modern art, music, literature but also anthropology, thanatology, psychology, cinema, sexuality, humour, etc. The blog’s scrupulous editorial criteria aim to avoid the muddy cheap stuff of supermarket wonders, as well as TV “mysteries” (UFO, ghosts, and the like) choosing to emphasize the little known history of a human race that has always turned diversity into a creative force.

THE BOOK OF MIRACLES
99.99€
Available