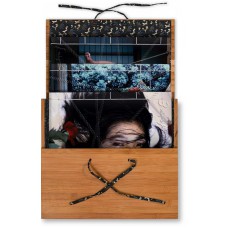 Meaning literally, "the beauty of tight binding", Kinbaku-bi, the Japanese art of erotic bondage, has long fascinated Nobuyoshi Araki, who has made it one of his most important subjects. He’s been called a genius and a poet, and also a misogynist, a pornographer, a monster, but Araki’s work transcends simplistic moralistic classifications; he has said of his work: "There is no conclusion. It’s completely open. It doesn’t go anywhere." Whether literally or figuratively, his bound subjects are certainly immobilized, yet in the most tantalizing ways.
This Collector’s Edition is limited to 845 copies, each numbered and signed by Nobuyoshi Araki. It consists of three volumes, enticingly hand-bound in the Japanese tradition and packaged in a wooden box, featuring Araki’s selection of his favorite bondage photos from over his entire career.

The artist
Nobuyoshi Araki was born in Tokyo in 1940. Given a camera by his father at the ripe age of twelve, Araki has been taking pictures ever since. He studied photography and film at Chiba University and went into commercial photography soon after graduating. In 1970 he created his famous Xeroxed Photo Albums, which he produced in limited editions and sent to friends, art critics, and people selected randomly from the telephone book. Over the years, his bold, unabashed photographs of his private life have been the object of a great deal of controversy and censorship (especially in his native Japan), a fact that has not fazed the artist nor diminished his influence. To date, Araki has published over 400 books of his work.