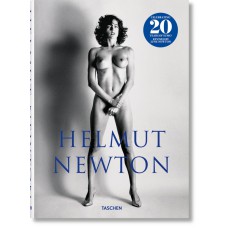 "You will own a piece of art history" —Quintessentially, London

A tribute to one of the 20th century’s most influential, intriguing and controversial photographers
SUMO was a titanic book in every respect: it broke records for weight, dimensions, and resale price.

Helmut Newton (1920–2004) always demonstrated a healthy disdain for easy or predictable solutions. SUMO—a bold and unprecedented publishing venture—was an irresistible project. The idea of a spectacular compendium of images, a book with the dimensions of a private exhibition, reproduced to exceptional page size and to state-of-the-art origination and printing standards, emerged from an open, exploratory dialogue between photographer and publisher.
With the physically commanding SUMO weighing in—boxed and shrink-wrapped—at 35.4 kilos, Newton created a landmark book that stood head and shoulders above anything previously attempted, both in terms of conceptual extravagance and technical specifications.
Published in an edition of 10,000 signed and numbered copies, SUMO sold out soon after publication and quickly multiplied its value. This worldwide publishing sensation now features in numerous important collections around the world, including New York’s Museum of Modern Art. Legendary SUMO copy number one, autographed by over 100 of the book’s featured celebrities, also broke the record for the most expensive book published in the 20th century, selling at auction in Berlin on April 6, 2000 for 620,000 German Marks – approximately € 317,000.
SUMO established new standards for the art monograph genre, and secured a prominent place in photo-book history. This new edition, carefully revised by June Newton, is the fulfillment of an ambition conceived some years ago by Helmut Newton. He would surely be pleased that, a decade on from its first publication, SUMO—now in a format that allows for a more democratic distribution—will reach the widest possible audience.

The artist:
Helmut Newton (1920-2004) was one of the most influential photographers of all time. Born in Berlin, he arrived in Australia in 1940 and married June Brunell (a.k.a. Alice Springs) eight years later. He first achieved international fame in the 1970's while working principally for French Vogue, and his celebrity and influence grew over the decades. Newton preferred to shoot in streets or interiors, rather than studios. Controversial scenarios, bold lighting, and striking compositions came to form his signature look. In 1990 he was awarded the Grand Prix national de la photographie; in 1992 the German government awarded him Das Grosse Verdienstkreuz for services to German culture, and he was appointed Officier des Arts, Lettres et Sciences by S.A.S. Princess Caroline of Monaco. In 1996, he was appointed Commandeur de l'Ordre des Arts et des Lettres by Philippe Douste-Blazy, the French Minister of Culture at the time. Working and living in close companionship with his wife until his death at 83, his images remain as distinctive, seductive and orginal as ever.

HELMUT NEWTON. PAGES FROM THE GLOSSIES
40.00€
Add to Cart

HELMUT NEWTON AND ALICE SPRINGS. US AND THEM
40.00€
Add to Cart