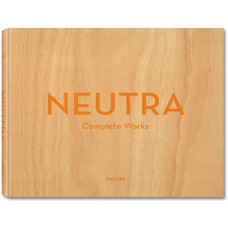 Originally from Vienna, Richard Neutra came to America early in his career, settling in California. His influence on post-war architecture is undisputed, the sunny climate and rich landscape being particularly suited to his cool, sleek modern style.
Neutra had a keen appreciation for the relationship between people and nature; his trademark plate glass walls and ceilings which turn into deep overhangs have the effect of connecting the indoors with the outdoors. His ability to incorporate technology, aesthetic, science, and nature into his designs brought him to the forefront of Modernist architecture.
In this volume, all of Neutra’s works (nearly 300 private homes, schools, and public buildings) are gathered together, illustrated by over 1,000 photographs, including those of Julius Shulman and other prominent photographers.

The authors
Barbara Lamprecht is a writer and teacher in architectural history, with a focus on modernism. She contributes to Dwell, The Architectural Review, Architecture, Architectural Record, and Fine Homebuilding and also practices architecture, specializing in sustainability and small spaces.
American photographer Julius Shulman’s images of Californian architecture have burned themselves into the retina of the 20th century. A book on modern architecture without Shulman is inconceivable. Some of his architectural photographs, like the iconic shots of Frank Lloyd Wright’s or Pierre Koenig’s remarkable structures, have been published countless times. The brilliance of buildings like those by Charles Eames, as well as those of his close friend, Richard Neutra, was first brought to light by Shulman’s photography. The clarity of his work demanded that architectural photography had to be considered as an independent art form. Each Shulman image unites perception and understanding for the buildings and their place in the landscape. The precise compositions reveal not just the architectural ideas behind a building’s surface, but also the visions and hopes of an entire age. A sense of humanity is always present in his work, even when the human figure is absent from the actual photographs. Today, a great many of the buildings documented by Shulman have disappeared or been crudely converted, but the thirst for his pioneering images is stronger than ever before.
The editor:
Peter Gössel runs an agency for museum and exhibition design. He has published TASCHEN monographs on Julius Shulman, R. M. Schindler, John Lautner, and Richard Neutra as well as several architecture titles in the Basic Art Series.