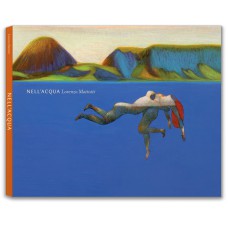 Naked in a “sea bubble” which isolates them from the rest of the world and the passing of time, a man and a woman blend together like two drops in the water. Surrendering to passion, they make all the gestures of love: they exchange caresses, take each other’s hands, kiss, hold each other tight. They loosen and strengthen their embrace and never part. With their eyes closed or lost in the beloved ones, they seem to be unconcerned with all the changes that occur around them, with the alternation of weather conditions, of day and night. They obsessively repeat the same movements to reinforce a ownership which is maybe undermined by the fear of losing each other or doomed to end within one week’s vacation.
From acrylic to inks, to crayons... as in Rooms Lorenzo Mattotti develops one single theme in a variety of forms and techniques: the gracefulness and harmony that only two bodies making love in the water can have. Taken away from reality, we are in turn charmed by the harmonious dance of the two lovers but also by the natural landscapes about which they do not care. Represented with a few simple details – the sea, the sky, the rocks – the landscapes charm us with the intensity of colours and signs, the games of shadows and lights, the trespassing in an oneiric dimension made possible by the skilful variation of techniques.
A dive into the sea and into love, a book full of passion that gratifies our senses and spread wonder.