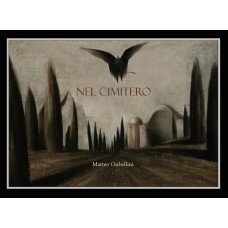 "In the evening before dinner, or in the morning, when the sky still has to choose its colour the shadows of the cypresses unfold and like carpets invite me in.”

With these words Matteo Gubellini takes us to a new dimension which erases the boundaries between life and death: a walk though the graveyard, where experiences in the shape of stories told by the tombs merge together showing us a new horizon.

Matteo Gubellini was born in Bergamo in 1972. He studied at the art college of his town before attending the Comic Academy in Milan. He has received many prizes as an illustrator and cartoonist, and has displayed his drawings in group and solo exhi bitions. He currently works as an illustrator in the field of printing and publishing, and cultivates his own passion for music and writing. Amongst his recent publications: Story of the House That Wanted to Move House, Artebambini, 2007; If I Were a Cat…, Bohem Press Italia, Trieste, 2008; A Real Lion, Bohem Press Italia, Trieste, 2009; La casa de mi abuela, OQO editora, Pontevedra, 2009; Kako je krokodil iskal nasmeh, Preserje, 2009. He lives and works in Crema, Italy.