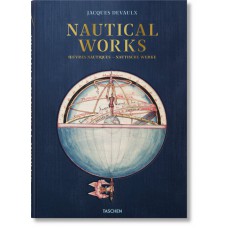 500 years after the historic French seaport of Le Havre was established, TASCHEN presents a facsimile reproduction of Les premières œuvres de Jacques Devaulx, pillote en la marine, first published by Le Havre–born “Naval Pilot to the King” Jacques Devaulx in 1583.
This extraordinary illuminated manuscript, dedicated to the Duke of Joyeuse, collates nautical, astronomical, and cartographic ideas as well as Devaulx’s own extensive notes, observations, and records as a seafarer, hydrographer, cosmographer and cartographer. An encylopedic reference for sailors, as well as a magnificent maritime showpiece for his royal employers, the elaborately annotated and decorated folios set out a vivid repertoire of naval and cosmographic tools and techniques, including astrolabes, nautical charts of the Atlantic Ocean, tabular statements of diurnal tides, star maps, and measurements for solar altitude.
This edition of Devaulx’s stunning document, produced in collaboration with the Bibliothèque Nationale de France, reproduces each of the 31 folios in all their dazzling art and science, including the original colorful illuminations, gold highlights, and volvelles. The volume features essays by Jean-Yves Sarazin and Gerhard Holzer, as well as commentaries from a team of experts coordinated by Élisabeth Hébert, contextualizing Devaulx’s work with fascinating insights into 16th-century seafaring and exploration.

“Devaulx’s name has entered the annals of science. His was a quest for new spaces and new ideas.”
— Jean-Yves Sarazin

The authors:
Gerhard Holzer studied history and geography at the University of Vienna and graduated with a thesis on the German-Austrian geologist Ferdinand von Hochstetter. Since 1989, he has been curator of the Woldan Collection at the Austrian Academy of Sciences in Vienna and has published a number of papers on scientific history, in particular on the history of discovery and cartography.