login | create an account
Categorie
Home » MOVIES OF THE 1950'S 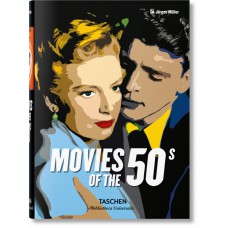 On the Edge
Movies from the decade of Cold War paranoia, Pop art, and Nouvelle Vague

At a time when people were terrified of UFOs and Communism, the film industry was busy producing movies that ranged from film noir to grandiose musicals. The paranoid public in the 1950s apparently craved family entertainment and dark, brooding pictures in equal doses.
The result is a decade’s worth of truly monumental cinema, from Hitchcock masterpieces (Vertigo, Psycho, Rear Window) to comedy classics (Tati’s Mr. Hulot’s Holiday, Billy Wilder’s Some Like It Hot), from groundbreaking Nouvelle Vague films (Truffaut’s The 400 Blows) to profound, innovative dramas like Antonioni’s L’avventura, Fellini’s La Strada, John Huston’s Misfits, and Kubrick’s Paths of Glory. Though censorship kept sex safely offscreen, the smoldering James Dean, Marlon Brando, and Marilyn Monroe provided plenty of heat.
This survey of the most important films of the fabulous fifties covers the wholesome, subversive, artistic, thrilling, and mysterious trends in cinema across the globe. This encyclopedia profiles each movie masterpiece through stills, a synopsis, and cast, crew, and technical listings. Whether you’re a rebel without a cause or a gentleman who might prefer blondes, this is a must-have for any film fan.

“… an inspirational reference book, put together with care and consideration.”
— Metro, London

The editor:
Jürgen Müller has worked as an art critic, a curator, and a visiting professor at various universities, and has published extensively on cinema and art history. Currently he holds the chair for art history at the University of Dresden. Müller is the editor for TASCHEN’s movies by decade series.