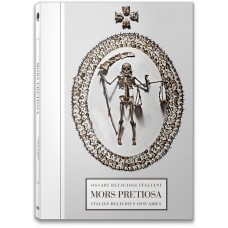 “There is a crack, a crack in everything: That’s how the light gets in” sings Leonard Cohen, and this is ultimately the message brought by the bones that can be admired in this book; death is an eternal wound and at the same time a way out. A long way from the idea of cemetery, its atmosphere of peace and the emotions it instils, the term “ossuary” usually evokes an impression of gloomy coldness but the three places in this book are very different. The subjects in question are Italy’s most important religious ossuaries in which bones have been used with decorative ends: the Capuchin Crypt and Santa Maria dell’Orazione e Morte in Rome, and San Bernardino alle Ossa in Milan. Thick with the sensation of mortality and vanitas, these ossuaries are capable of performing a completely unexpected role: on the one hand they embody the memento mori as an exhortation to trust in an afterlife for which the earthly life is a mere preparation and test, on the other they represent shining examples of macabre art. They are the suggestive and emotional expression – which is at the same time compassionate – of a “high” feeling: that of the transitory, of the inexorability of detachment and the hope of Resurrection. Decorated with the same bones they are charged with safeguarding, they pursue the Greek concept of kalokagathìa, namely to make the “good death” even aesthetically beautiful, disassembling the physical body to recompose it in pleasant and splendid arrangements and thereby transcend it. The clear and in-depth texts of the book set these places in the context of the fideistic attitudes of their time and Christian theological traditions whereas the images immerse us in these sacred places charged with fear and fascination. Page after page, the patterns of skulls and bones show us death in all of its splendour, they make it mirabilis, worthy of being admired.

The series:
After the first volume about the Palermo Catacombs, and the second about the Fontanelle cemetery in Naples, this is the third book of the #BizzarroBazar series, edited by Ivan Cenzi. The object of this series, with texts in Italian and English, is to enhance and explore some of our peninsula’s hidden wonders and invite people to think about its artistic and cultural heritage. The series conveys to the reader the same sense of astonishment and delight that can be experienced when entering a Wunderkammer. The absolute protagonists of the book are the amazing images by Carlo Vannini, one of the most recognized art photographers in our country, which offer the reader a perfect visual guide.

The photographer:
Carlo Vannini is the photographer of all “cultural” objects: artworks, archaeological finds, restoration works, architectural structures, city views, but also ordinary handcrafted artefacts permeated by a strong historical feeling. He was born in Reggio Emilia in 1956, where his uncle, a painter, and his father, a decorator, made him familiar with artistic materials. After a short amateurish experience, Carlo developed a strong passion for the professional reproduction of artworks, which has been leading him through exciting adventures while documenting restoration works. He has gradually developed a mastery of photographic techniques such as ultraviolet, infrared, skimming light, transmitted light and mirrored light. Since 1983 he has been creating illustrations for catalogues and still-life advertising photographs and is acknowledged as one of the leading Italian fine art photographers. Website www.carlovannini.it